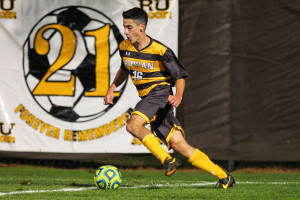 Like a much-needed break after a long week of work or class, the Rowan men’s soccer season has ended too soon.

After compiling a regular-season record of 16-5, Rowan saw its season come to a close in a 2-1 overtime loss at the hands of Dickinson College in the first round of the Division III Championship Tournament.

“It was a good game for us, not great, and obviously not the result we were looking for. It was our first time in an environment and situation like that,” head coach Scott Baker said. “I think we handled it well, but not great. It’s hard to focus on that game alone, especially after the season we had. I’m so proud of the guys.”

The 16-5 record was the best for the Profs since they went 19-6 in 2003. That year was also the last in which they made the DIII tournament.

“Right now it’s tough to swallow. We wanted to go farther, but when you step back and look at it, we had a tremendous season,” senior midfielder and captain Shane Kohler said. “We hadn’t made the tournament in 12 years. It’s not an easy step to be the team to change that, so for me as a senior it was cool to see. It’s changing and for the better. I expect the program to stay at that level.”

The brown and gold got to where they were by starting out hot, winning eight of their first ten games while outscoring their opponents 35-11. In that stretch of games was a 4-2 victory over then No. 11 ranked Messiah College. It was the first win against the Falcons in program history.

Once New Jersey Athletic Conference play kicked off, the Profs didn’t slow down. They went 6-3 over the conference schedule, outscoring opponents 22-8.

All of those numbers are impressive, but even more impressive was the majority of the roster, 22 out of 28 players, being comprised of underclassmen.

“I’m sure teams looked at us and thought that we couldn’t be good because we played a lot of underclassmen, but we held our ground,” freshman defender Will Sjaastad said. “It was inspiring. It was great for us, the program and the alumni.”

However, the accolades didn’t end there.

“It’s a great motivation especially for next year. It sets expectations for all of the guys,” Dennis said. “I know that we can exceed those.”

Sjaastad said that although the team will lose leadership now with senior goalkeeper Jon Robbins, senior defender Marco Fernandes and Kohler leaving through graduation, the future looks bright for the men’s soccer team.

Kohler expects the team to go only up from here, and Baker sees a similar path for the Profs team.

“The ultimate goal is to be the best team in the country. One way of doing that is winning a title and we took a lot of steps to being a great program,” Baker said. “We built that foundation this year. We feel that we can win games and be an elite team. We need to prove it, but internally we feel like we can be with elite teams. Moving forward, we want to be the best we can be and win titles. We’re excited about that. We’re excited about the 2016 season.”