Last week, Whit reporter Danielle LaSassa discovered the story behind Winans Hall and the Chamberlain Student Center. Read that here. This week, Danielle tells us the history of Bunce, Bozorth and Robinson halls.

Rowan University has a long history that dates back to 1923, when Glassboro Normal School was founded. Over the years, notable individuals have contributed to the school in countless ways, from donations to excellence in teaching. One way to learn about these people is looking to the names on our campus buildings.

Bunce Hall has been a part of Rowan’s campus since the beginning, but was first known as Administration Building, then later as College Hall.

According to Rowan’s website, Bunce Hall was the first building built on the campus. Bunce was built to be facing away from Route 322, and originally was meant to be at the center of the campus. According to “More Than Cold Stone: A History of Glassboro State College, 1923-1973,” written by former dean Robert D. Bole, the building was named after the second president of the university, Dr. Edgar J. Bunce.

According to the biography, Bunce expanded course offerings and increased enrollment. His presidency came during World War II and he strived to get more men to enroll at the university. He was also responsible for liberalizing rules. Bunce re-energized the value of athletics, which ended up attracting more men to enroll.

Bunce retired after 17 years as president at Glassboro State College.

In 1962 and 63, the building underwent renovations, replacing wooden corridor floors, fluorescent lighting, and painting classroom walls, according to “More Than a Cold Stone.” The building was then named after Bunce for everything he had done for the campus. Bunce Hall now contains the business, English, foreign languages, literature, philosophy and religion, and theatre and dance departments.

Robinson Hall was named after Thomas E. Robinson, the third president of Glassboro State Teacher’s College who began his role in 1952 after Bunce retired. According to “More Than a Cold Stone,” Robinson was known for the expansion he brought to the campus. During his presidency, several buildings were built and renovated.

The college constructed 14 buildings, and full-time enrollment jumped from 400 to 3800, according to Robinson’s biography provided by Rowan’s website. Robinson expanded onto the north side of Route 322, which was once a peach orchard. He also changed the name of Glassboro State Teacher’s College to Glassboro State College in 1955, to appeal more to the other departments and courses the college offered.

When Robinson started his presidency, the college only offered three majors, but when his presidency came to an end in 1968 it had 25. Robinson resigned after 17 years, but what he has done for the college lives on to today. According to a section of the Rowan website, Robinson Hall is considered to be one of the largest classroom halls on campus. Robinson Hall is now home to numerous and varied departments, from computer science to psychology and liberal arts. The building only consists of classrooms and seminar rooms to enrich its students.

According to Rowan’s website, Bozorth Hall was named after the former registrar Loriot Bozorth and was opened in the year 1954. The hall was originally the campus elementary school, and Bozorth also served as its principal for a time.

Bozorth Hall was first renovated in 1985, and an addition was added in 1994, according to Rowan’s website. Now the hall houses the college of communications as well as an “ITV distance learning classroom,” the radio/television/film department, a computer-equipped journalism newsroom, an advertising/public relations client suite, a layout room and a computer-equipped writing laboratory.

According to “More Than a Cold Stone,” Bozorth passed away in 1964. Robinson, the college’s president at the time, said in Bozorth’s memory, “You have always placed college welfare above self interest. Glassboro owes you a tremendous debt of gratitude.”

Check back next week for the history on more buildings on Rowan’s campus. 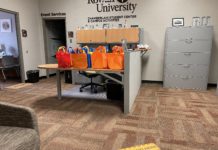