On Tuesday, Feb. 5, the Youth Empowerment Program of Rowan University hosted “Relentless Hearts: A Story of Time, Love & Perseverance,” a special Black History Month speaking event in the Student Center that featured Mike Africa Jr., a Philadelphia-based activist and son of Mike Africa Sr. and Debbie Africa, two members of the organization MOVE who were imprisoned in 1978.

According to the FBI’s story, in 1977, Philadelphia Mayor Frank Rizzo ordered MOVE, a black liberation group formed in 1972, to vacate their original Powelton Village compound, supposedly due to neighbor complaints about their day-to-day activities. They were also required, by court order, to surrender any and all weapons they had obtained. In exchange, the Philadelphia police agreed to release several previously imprisoned MOVE members.

When MOVE refused to give up their arms, a year later, in August 1978, a deadly firefight occurred between Philadelphia police officers and MOVE members, who barricaded themselves inside the Powelton Village residence. In the aftermath, Officer James J. Ramp was killed by a gunshot wound to the back of the neck and nine members of the group were arrested and later sentenced to a maximum of 100 years on charges of third-degree murder.

May 1985, several years after the firefight, an even more violent siege against other MOVE members occurred in an Osage Avenue home in West Philadelphia, ending with a police helicopter dropping a powerful bomb onto the house, resulting in 11 deaths, as well as the total destruction of over six dozen row homes, leaving countless city residents homeless.

Besides the Branch Davidians siege in 1993, the 1985 MOVE bombing is widely regarded as one of the most infamous events in law enforcement history.

Over the years, tens of thousands of activists around the country have staged protests, marches and campaigns, many of them led by Mike Africa Jr., that challenged the FBI’s official story.

The majority of people in activist circles believe that Officer Ramp was killed by friendly fire in the initial ’78 shootout rather than by any of the MOVE members, who sympathizers of the group say acted in self-defense against the police.

After being denied parole in 2008, Mike Africa Jr.’s mother Debbie Africa, who gave birth to her son in prison, was released and let out on parole in June 2018. Four months later, Mike Africa Sr. was released on parole. Mike Africa Jr. has not been with both his parents since they were jailed nearly 41 years before. He recalls a feeling of bliss upon reuniting with his mother and father.

“It was unbelievable. The feeling of pure joy. [It’s] something I’ve been waiting for all my life and beyond. And it’s finally here. [It took] 40 years to get here. It’s bittersweet too, because there’s other people who are still in prison,” Africa Jr. said.

So far, Mike and Debbie are the only two of the MOVE 9 to be released from prison. Chuck, Delbert, Eddie, Janet and Janine still remain behind bars. Two other individuals of the MOVE 9, Merle Africa and Phil Africa, died in 1998 and 2015, respectively.

The event was as powerful as it was emotional as Mike Jr., Sr. and Debbie took the audience through a lengthy timeline of their lives in the movement. The two panelists recalled what it was like growing up in MOVE, being separated from Mike Jr. for 40 years and hearing news of the ’85 bombing.

Sunny Singh, an activist and attendee who professionally documented the event for his popular video platform Hate5Six, has used his position to bring a lot of attention to the MOVE 9 campaign, mainly through the power of music.

“When I started running [Hate5Six], I made an effort to make sure I put politics in with the content,” Singh said. “For me, growing up, punk and hardcore was an alternative form of education, and I wanted to continue doing that by paying that forward.”

Many bands in the punk and hardcore realm, such as Inside Out, a personal favorite of Singh’s, write lyrics with strong, sometimes controversial, political subjects, such as the events surrounding the MOVE 9.

Close to 100 students, faculty and friends of both Mike Jr., Sr. and Debbie piled into the Student Center in room 221. Due to the large number of event goers, more chairs had to be retrieved. The last half hour of the event became a Q&A session between supporters, many of them Rowan students, and the panelists.

Dr. Sandra Joy, a sociologist professor and one of the organizers of the event, has been campaigning for the release of the MOVE 9 since the 1980s, along with being a close associate of Mike Sr. and Debbie Africa.

The sociology class she teaches at Rowan University focuses on children with incarcerated parents. Her Youth Empowerment Program works directly with adolescents who have incarcerated family members.

“[Mike and Debbie’s] story is so powerful and is illustrative to what is happening to all of us in terms of the system being so assaultive against us, and against life in general.,” Joy said. “[Mike Sr. and Debbie] have been warriors in the frontlines of the movement and we need to give them the time, honor and respect to hear their stories.”

The professor further expressed that the work of Mike Sr. and Debbie has sky-rocketed the fight for social justice against a system she says is waging a war against education, healthcare, criminal justice and more.

Joy is the president of the Rowan University Maroon Book Club, a discussion group that focuses on topics of race relations, economic justice and many more political subjects. The club meets every other Tuesday night at 8 p.m. in Hawthorn Hall room 215. 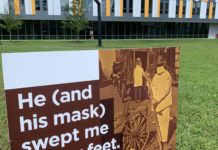 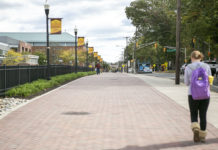