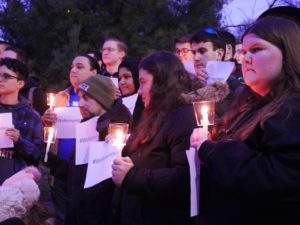 Members of Hillel, Chabad, the Rowan Center for Holocaust and Genocide Studies, Student Government Association, Alpha Epsilon Pi, Phi Alpha Theta, Rowan Republicans, Rowan Democrats, and the LGBTQIA+ Center gathered on the back Student Center Patio at 5 p.m. on Monday, January 27, to participate in a candle lighting ceremony, honoring those lost and affected by the Holocaust.

The event was run by junior international studies major Alex Rossen, and overseen by Professor of History and Programmer for the Rowan Center For the Study of Holocaust, Genocide, and Human Rights Dr. Jody Russell Manning.

“I’ve been a part of this since the second semester of my freshman year,” Rossen said. “My first involvement on campus was with Hillel, which is an on campus Jewish cultural organization and we did an event similar to this in conjunction with the Center for Holocaust, Genocide and Human Rights. That’s when I first met Dr. Manning and expressed my interest in the subject and he offered me a position interning for the academic department.”

Rossen was pleased with the turnout for the candle lighting, and hoped that the department expands.

“I know this isn’t what most people have in mind when they think of extracurricular activities, but I really hope that this organization that we started has a bigger future at Rowan because it’s just so important” Rossen said.

“We had so many different organizations take part and come out to support. The Center itself has grown exponentially and so has the student involvement,” Dr. Manning said. “My biggest hope is that we just keep growing, because this message is so important for everyone. It not only affects those who may have been involved, but also generations later, and we need to deal with this because unfortunately it keeps happening.”

“I’m really happy with the turnout,” Gropen said. “Not only because of how important it is to the Jewish students at Rowan but seeing so many non-Jews coming to support means a lot to us and showing that a lot of people do care and want to carry on that legacy I will never forget.”

“It’s such a nice way to meet new people you’re already connected to, and a really great thing to have a community that’s always there for you,” Osmun said.  “I just think it’s really incredible to have so many people come out in support for each other and its such an important thing to keep remembering the Holocaust and keep remembering all of the people who didn’t survive and all of the people who did survive because we are the bridge for all of their stories.”

Osmun stressed the importance of keeping the stories alive. “We’re the only branch for them now; for all the people whose lives were lost, we’re now what keeps their memory alive. That’s such an important thing, especially as a Jewish person to just keep remembering so those memories never fade.”

For more information of upcoming events by the Rowan University Center for the Study of Holocaust, Genocide, and Human Rights, please visit https://chss.rowan.edu/centers/RCHGS/index.html and check out their Spring 2020 Event Calendar. Students can also follow the Center on Facebook at www.facebook.com/RUCHGS/ and on Instagram at @rowanchgs

Rowan Student Arrested for Assault and Robbery at Edgewood Apartments