This upcoming weekend for Rowan ice hockey has been aptly labeled a “parachute weekend” by head coach John Caulfield.

Caulfield said this alluding to the fact that despite falling 2-1 to Rider University in the opening round of the Mid-Atlantic Collegiate Hockey playoffs, his team is still alive in the national playoff picture with a regional contest this weekend, Feb. 27, against Ohio University.

The coach spoke at length about the degree of play that’s needed in order to win games when playoff life is on the line, and how the level of play his team carried into the opening round was underwhelming.

“We gauged how hard we thought we needed to play against a team [Rider] we had success against, and we did not match the intensity level that they brought,” Caulfield said. “You can’t bring a ‘B-game’ to an ‘A-game’ requirement.”

The lack of an “A-game” was mentioned numerous times by Caulfield after the loss to Rider. He harped on the fact that his squad was missing an extra gear, and deficient of the scoring punch they had displayed in the tail-end of the season.

The brown and gold were forced to play much of their playoff contest along the boards and struggled to get pucks on net, tallying just 24 shots on goal.

Rowan was without Alekos Polis, their leading scorer and one of the veterans on the bench. They will be without his services for the rest of the postseason as he deals with an illness.

Figuring out how to compensate without Polis in the lineup is an unwelcome task for Caulfield, but a necessary one.

“We’re going to have to get a couple guys to step it up. Hopefully Vulpio, Quinn and Liszewski,” Caulfield said. “It’s hard because they were thrown together late. Hopefully the game with Rider, then a couple practices maybe they’ll get a little bit more chemistry, and help us get over that hump.”

The line that Caulfield is counting on to produce in the absence of the Profs’ offensive backbone features two underclassmen, and a total points combination that still falls eight points shy of Polis’ alone.

But as the team has stressed all season, it is about the quality of play that all four lines can churn out, rather than one guy. Rowan will roll with four lines to keep everyone fresh.

Ohio is an unknown team to the Profs, as the two sides never saw each other in the regular season. Caulfield said he has talked to some coaches that have played against Ohio and gathered that they are a “big, fast team.”

Rowan is a “small, fast team” according to Caulfield, and he says there is rarely a team that can match them speed-wise.

The presence of the unknown, in terms of scouting Ohio, may not be the worst possibility for the Profs, however.

“We need to focus on what we’re doing, more than what they’re doing,” Caulfield said. “We just need to roll up our sleeves and get ready to work.”

For the Profs seniors, the realization that this could be their final game did not go unrecognized.

“This could potentially be my last game ever playing hockey, so I’m going to give it everything I got and go out with a bang,” Fowler said. 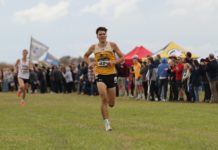 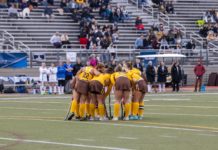