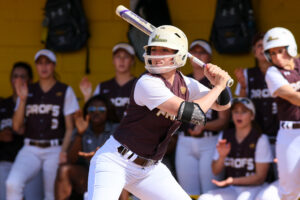 The Rowan University softball team has enjoyed a solid 3-1 start to their season. Expectations are high for Rowan, who are coming off a 33-11 season which ended in the championship game of the NCAA Babson Park Regional.

The Profs are led by senior outfielder Morgan Smith who is individually coming off a stellar 2017 season. Last year she led the New Jersey Athletic Conference (NJAC) in RBI’s, doubles, total bases and walks. Despite the impressive stat line from a year ago, Smith is ready to leave it in the past, so she can focus on the long season ahead.

“Last year was last year,” Smith said. “I’m worried about with how I’m playing right now. I’m trying to do whatever I can to help the team and improve from last season.”

The senior has four hits in her first eight at-bats to start the season. Two of those hits have been doubles and she has already drawn five walks.

Smith, who is from Millsboro, Delaware, started playing softball when she was five years old. Despite also playing volleyball, she always knew softball was her main sport.

“In high school, I started getting offers for softball freshman year,” Smith said. “I love it, and softball has pretty much been my life.”

Heavily influenced by her dad and grandfather over the course of her softball career, she said they were the ones that made her fall in love with the sport.

“Both of them played baseball,” Smith said. “My family has grown up around baseball and softball. The two of them taught me everything. I never even went to a hitting coach growing up. They have pushed me to go farther and farther in this sport.”

Smith wasn’t aware of Rowan until her junior year in high school, when former Rowan assistant coach Nate Parsley, who is also from Delaware, saw her play in a tournament.

“He came up to me after one of the games and told me I should check out Rowan,” Smith said. “So, I visited, and it was just like home. I thought the school was awesome and when I met the team they were like a family and I loved that.”

Smith and the Profs’ next action will take place in Kissimmee, Florida, where they will play 12 games in eight days ending March 16. Rowan’s first two games back from their trip will both be at home, with the first one coming on March 21 against Neumann University followed by a matchup with the Massachusetts Institute of Technology on March 26.