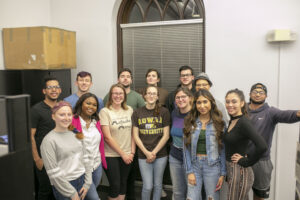 Who would have thought that The Whit’s Co-Editors-in-Chief would have been an immigrant from the Dominican Republic and an underclassman STEM major? It’s certainly not a combination most people would gamble on for high-profile gigs in a writing discipline, and yet, as The Whit ends its current school year printing and gears up for the next, this is the unlikely duo that will be at the helm of Rowan University’s student newspaper for the 2019-2020 school year.

Miguel Martinez, a current junior radio, television and film (RTF) major, and Tara Lonsdorf, a current sophomore geology major, previously served as Multimedia Editor and as Arts & Entertainment Editor, respectively. The two ran for Editors-in-Chief on a joint-platform and were elected by out-going Whit staff.

Miguel, who first came to America when he was thirteen, joined The Whit after honing his interest in photography for several years. He was intrigued by the idea of students being able to put together their own newspaper, and emboldened by the confidence the previous staff had in his abilities and in his work. Even though he is still learning English, he has always felt welcome at The Whit. Since joining the Whit staff, Miguel has gained much more confidence in his English skills, and has even picked up a journalism minor.

Tara spent three years writing for her high school newspaper, where she realized her dream of writing long-form features for National Geographic. She had originally planned on double majoring in environmental science and journalism, but after her acceptance to Rowan University and course registration difficulties, has settled with majoring in geology and having writing credits on The Whit.

To be transparent, neither Editor-in-Chief would have been willing to fill this role without the other. To be even more transparent, that’s a really, really good thing. A newspaper staff is always better when it embodies diversity – not just in race, gender, and cultural perspective, but in the skills and experiences that can contribute to the publication as a whole.

Journalism is interdisciplinary, increasingly so in the age of rising digital media. Of course writing and journalistic style are still vital to the success and credibility of any publication, but now more than ever, this industry needs creatives who can produce vibrant video content, gorgeous graphics and intuitive page layouts. It demands technicians in fields such as statistical analysis, geospatial communication and computer programming to interpret data into something readers can understand. It all but begs for experts who can credibly write about topics such as finance, climate change and racism with competence and nuance.

The AP Style Guide has officially recommended that articles avoid terms like “racially-charged” as opposed to “racist” when reporting on incidents of actual racism — a change that allows our society to begin addressing racism for what it is. Cut-and-dry journalists, who are often taught to abide by neutrality to the point of myopia, would likely not have had the scope to make this decision without the influence of activists who understand the subject-matter.

Inclusive newsrooms make a difference in how audiences navigate the world.

The industry of journalism is changing to reflect the more connected world on which it reports. For the 2019-2020 school year, The Whit’s staff will consist of students studying not only journalism, but also international studies, psychology, philosophy, linguistics, marketing, RTF and geology. Maybe this staff is different in composition than what most people would expect, but maybe it’s time to change the expectations of most people.

This current staff could not have formed without the foundation laid by everyone from the 2018-2019 staff and of advisor Katherine Quigley. Specifically, the new staff would like to thank Joseph Gramigna for all of the help and support that he gave, even when sending writers into seedy basements. Best of luck to everyone as they graduate and begin the newest chapter of their careers.

Thank you for believing in us, despite the odds.

Editorial: Social Media is Fooling you – There’s Nothing Wrong With Following a Traditional Career Path