This upcoming weekend, the Delaware Blue Coats will return to their home court at the Chase Fieldhouse for the first time in three weeks.

The Coats kicked off their season with a home game in Delaware when the team won 114-100 over the Long Island Nets. However, they had to immediately pack their bags and head for a four-game long road trip up and down the East Coast.

The team went 3-1 over that stretch, earning one victory over the Maine Celtics and two wins over the College Park Skyhawks. Delaware’s only loss came during the Nov. 14 game against the Celtics, which the team lost 113-108.

Despite dropping one game to Maine, the Blue Coats are still comfortable with a 4-1 record to kickstart the season. Throughout the first five games, the team averaged 112.2 points per game and 26.6 team assists per game, the second-best average in the league.

Delaware leads the entire league in steals per game at 13.8. The squad also ranks fourth in the league for blocks per game, averaging 6.8.

The team will be without Shaquille Harrison and Haywood Highsmith the weekend of Nov. 26. Both players were invited to represent the United States as a part of the Men’s World Cup Qualifying Team.

“Those are guys who play a lot of minutes for us,” Assistant Coach Isaiah Fox said. “It is a good opportunity for other guys to get minutes and step up. It is a team effort, and I think it could be anyone [that steps up].”

Both Harrison and Highsmith are leaving big shoes to fill in their absence, as they have been frequent starters and major statistical contributors thus far for the Coats.

Harrison is second on the team in scoring average, registering 18.8 points a game. He also averages 3.3 steals per game, which is the second-best average in the G League. Highsmith averages 16 points per game on an above-average 57% field goal percentage.

With Harrison and Highsmith away from the team, opportunities will arise for other players to step up. Will it be Charlie Brown Jr. who will carry the load of the team’s scoring? Will Brian Cameron earn himself time in the rotation? How will the team fare without two of their most consistent players?

We’ll know this Saturday at 1 p.m. when the Blue Coats play two home games against their rivals, the Raptors 905.

“Every time we step out there on the floor, we realize we want to get a win,” Jared Brownridge, Blue Coats’ guard, said. “We’re heading home, we’re back in town, and we’re relaxed. The main thing we want to focus on is getting these two wins.”
For comments/questions about this story tweet @TheWhitSports. 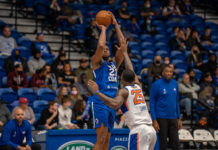