Every year Ebony Magazine selects 100 individuals from the national African American community for their outstanding work in 16 categories, including black thought, the future of everything and politics as (un)usual.

This year, Rowan University graduate Trymaine Lee (’03) was listed among people such as John Legend, Beyoncé and Wendy Williams. Lee was nominated for being “one of the most valued truth tellers in mainstream media.”

“Growing up, Ebony Magazine was a staple in my household,” Lee said. “To be alongside so many courageous, brilliant people is an honor.”

After graduation, Lee went on to work for The Times-Picayune in New Orleans, pursuing his career in journalism. In 2006, while working a Sunday shift, Hurricane Katrina hit. He was one of the first seven reporters initially on the scene and remained in New Orleans to continue reporting.

Lee was later awarded a Pulitzer Prize for the story, which he shared with Doug MacCash, Manuel Torres and Mark Schleifstein. He described winning as bittersweet, similar to the feelings of survivor’s guilt. However, Lee does consider the award a point of pride.

“Pulitzer doesn’t mean anything to the people affected by the storm,” he said. “In this business, we are very self-congratulatory.”

In addition to Hurricane Katrina, Lee was also one of the first reporters to cover the Trayvon Martin case in 2012. Lee believes cases such as the one involving Martin make people more aware and give social issues a collective voice.

“[The case] set the stage for the conversation we’re having right now,” Lee said. “We didn’t get here without Trayvon Martin.”

Lee has also worked at the Philadelphia Tribune, The New York Times and The Huffington Post. He is currently living in Brooklyn working as a national reporter at MSNBC. His focus is finding new ways to tell stories while writing a book about gun violence in America, which will be published by St. Martin’s Press.

“With his personality, depth of thought, and his desire to learn and improve, [Lee] was rare,” said Professor Emeritus Julia Chang, who taught Lee during his time at Rowan. “I knew he was going to succeed at whatever he decided to do.”

One of Lee’s recent projects includes Geography of Poverty, a photo series that looks at poverty in America. Lee traveled to locations such as Flint, MI, where poverty is staggering and prostitution is common. He also visited multiple cities in Texas and North Dakota that are currently in deep poverty and have high suicide rates.

“It’s not just stereotypes like the poor, black mother living in Philly, it’s everyone,” Lee said. “[I want] to be able to tell these stories with the support of a major network. I keep trying to be the voice for the ones that don’t have one.” 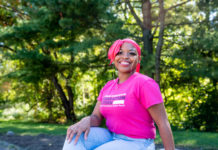