Five Rowan University students competed against each during the seventh annual “Rowan’s Got Talent” competition.

Held in the Student Center Ballroom on Saturday, Nov. 21, the television-show-inspired event welcomed Dean of Students Richard Jones, Student Government Association (SGA) President Anthony Wohlrab and Programing Assistant for the Student Center, Kaitlin Shaginaw as the three judges for the evening’s performances. The show was also hosted by the Rowan Television Network (RTN) and aired live on TV.

Before the actual show began, early arriving audience members were treated to instrumental songs played by the Student Center’s house band The Ariables.

In a similar fashion to other “Got Talent” shows, each contestant was introduced by a short video explaining their talent and facts about themselves. The opening performance of the night was sophomore communications major Sierra McCoy singing Michael Jackson’s “Not Alone.” She received positive reviews from the judges, but was critiqued on her lack of confidence and stage presence.

The second contestant was sophomore psychology student Isabelle Piatti, who sang “Photograph” by Ed Sheeran. Again, the judges gave encouraging comments, but thought she needed to improve her stage presence.

Freshman music industry major Tyler Sarfert was the only male performer of the night, as well as the only person to accompany his singing with an instrument, his acoustic guitar. Playing “I Don’t Need No Doctor” by Ray Charles, Sarfert used the rhythm of the blues tune by stomping on the stage to the song’s cadence. The audience joined in as well, clapping along to the beat. The judges celebrated Sarfert’s recital, applauding him for combining his vocal talent with a live instrument instead of relying solely on his voice.

Singing a rendition of “Only Hope” from the 2002 film “A Walk to Remember” was junior public relations major Sarah Jenkins. Before beginning, Jenkins explained in her video that that she comes from a family of musicians and she was dedicating her performance to her deceased mother. The judges explained she needed to project her voice and her improve her choreography.

The final contestant was Marjorie Graves, a sophomore psychology major, who sang “Touch The Sky” by Hillsong. Graves credited her passion for gospel music to her years in her church’s choir.

“You remind me of Whitney Houston,” Jones said of her performance.
Once the contestants finished performing, in true TV fashion, online voting polls opened for viewers in the audience and at home to cast their votes for the winner.

The top three finalists received prizes of ‘Boro Bucks. Jenkins took third place, winning a prize of $50. Second place and $100 went to Sarfert and the first place winner of “Rowan’s Got Talent” was Graves, who won $200.

“I didn’t really do it to win,” Graves said. “I didn’t know there was a prize or anything. I just did it because I wanted to sing gospel songs to the crowd.” 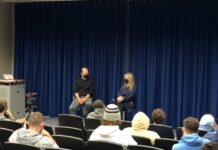 Amy Fadool Discusses Females in the Industry, Philly, Cancer and Volunteer Work During Pizza With the Pros 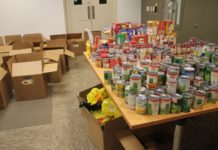