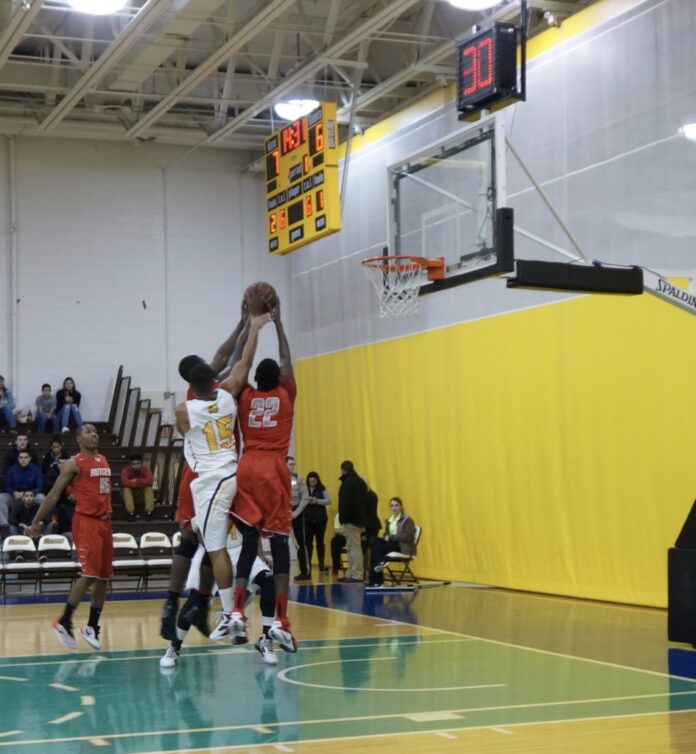 The roller coaster ride that has been Rowan men’s basketball’s 2015-16 season is only six games from coming to an end. With a 8-11 overall (5-7 NJAC) record, the pressure is on the Profs for the final stretch.

The brown and gold currently occupy the eighth spot in the NJAC standings. They will face only conference opponents for the remainder of their season, meaning that their play will determine their fate. While the Profs are currently second in the NJAC in points per game (79.4) their defense late in games has cost them some close contests so far this season.

“I think we lead the nation in losing close games,” said head coach Joe Cassidy. “That’s just the way the season has gone, and I’m hoping we’ve learned what we needed to learn from those games.”

Cassidy said he has stressed the importance of keeping offenses on their toes in practice over the past couple weeks. He said that the team worked in a 1-3-1 defensive scheme for the first time of the season this Monday against Ramapo College.

“We’ve spent more time in practice working on [defense], and we’ve added a couple things so we have a little bit more variety,” Cassidy said. “The 1-3-1 we played against Ramapo, that’s something we haven’t played at all and just introduced over the break.”

The Profs are sensing the urgency for improvements on the defensive end as well. Senior guard Kris O’Connor said that the offense knows they can score against anyone; they just need to make stops.

“Everybody on our team can score,” O’Connor said. “It’s more about the defense, and if we can step up on defense, that’s how we’ll win more games.”

Freshman guard Nick DePersia, who had seven steals to go along with a career-high 26 points versus Ramapo, has begun to step up defensively. DePersia said that communication has been one of the Profs’ keys on their side of the court.

“When we’re mixing things up on defense you have to be active, have active hands and it’s also about being in the right place at the right time,” DePersia said. “We’ve also been really successful in transition and we were able to capitalize on those turnovers.”

Rowan has a 2-4 record against its remaining opponents this season, and three of those losses were by four points or less. O’Connor feels that the team has a chip on its shoulder with every one of these teams because of how each game came down to the wire.

“It’s frustrating because we feel like we can win every game,” O’Connor said. “Rutgers-Camden, we owed them one. And New Jersey City, they’re the leader, so we’re definitely coming for them.”

Unfortunately for the Profs, O’Connor, who is second on the team in points per game won’t be traveling to Jersey City on Saturday with the team because of a family obligation. It’s a big loss for a squad fighting for playoff contention, leaving Cassidy in need of someone to produce in the senior’s absence.

“It’s time for the next guy to step up,” Cassidy said. “We’re still not sure who we’ll start in his place, but [sophomore forward] TJ Booth should see a big increase in his minutes.”

Other than finding a one-game replacement for O’Connor, Cassidy doesn’t intend to change much about how his team is playing. At this point in the season, the team understands its strengths and weaknesses and Cassidy hopes they can apply them on the court.

“There’s not a whole lot you can change at this point in the season,” Cassidy said. “We are who we are, and we’ve got to play better.”