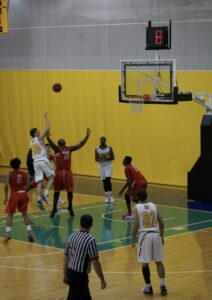 It was an all-around good team win for the Rowan men’s basketball team against Rutgers-Camden (2-15, 1-10 NJAC) on Wednesday, who were able to ride the momentum from their last win against Ramapo to defeat the Scarlet Raptors, 82-64.

Rowan now sits seventh in the conference standings at 5-7 (8-11 overall). The team has six games remaining in the season, all against NJAC opponents. With their second win in three days under their belt, the Profs belief they’ve made the proper adjustments to end the season on a high note.

“We’re feeling good,” senior forward Chris Gross said. “We’re just trying to make the playoffs, that’s all that matters right now. These are the games you can’t lose in this conference, so we just have to take care of business.”

Gross contributed 12 points and four rebounds to the brown and gold victory. Senior guard Kris O’Connor scored a game-high 20 points (7-of-13, 5-of-9 3PT), including three-straight three-point baskets that put Rowan ahead by 14 early in the second half.

Head coach Joe Cassidy said the run was a perfect example of how the Profs’ offense is supposed to operate.

“In the second half, when Kris O’Connor when on that run, that was all out of the offense,” Cassidy said. “Our offense is built to get those looks, and when we get them we need everybody to convert those points.”

The Profs will head to NJAC-leading New Jersey City University (11-6, 9-2 NJAC) on Saturday without O’Connor (family obligation), who is second on the team in scoring. Cassidy admits he doesn’t know who will shoulder the load for the brown and gold, but is calling on one of the team’s core players to step up.

“Someone’s going to have to get more involved, but I don’t think we’re going to go much deeper into the bench than what we normally do,” Cassidy said.

“We have a lot of weapons; someone will step up,” Gross added. “They squeaked one by us last game so we’re going out there to get a win.”