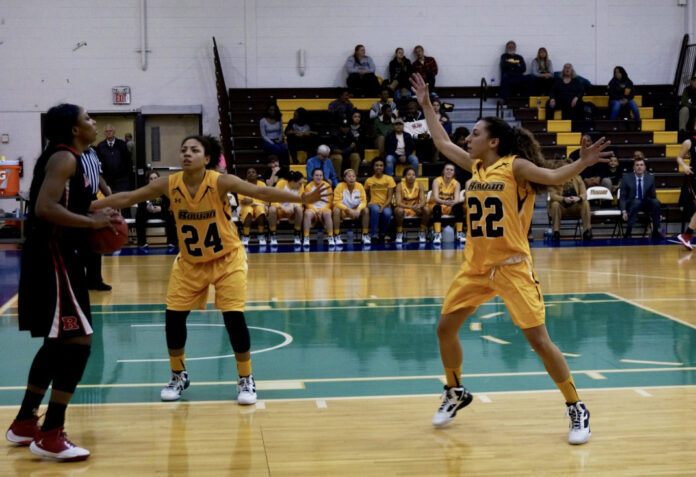 While the students of Rowan were at home enjoying their winter break, the women’s basketball team was rattling off wins at a torrid pace.

After beginning the season at 6-0, the Profs went on to win five more games during the month of December before suffering their first loss of the season to Cabrini College, 77-75 in overtime. The 11-0 record out of the gate prior to the loss was the program’s best since 1999-00 (12-0).

“We had a solid lead [over Cabrini] and we went eight minutes without scoring a field goal at the end of the game,” head coach Gabby Lisella said. “In overtime we had good foul shooters at the line and missed eight free throws in a row. We never do that. In spite of all that, we almost won anyway.”

“[Stockton has] two 6-foot-2 players inside; we were able to contain the girls inside but the team got hot and we had a very cold shooting night,” Lisella said of her team’s lowest scoring output of the season. “We shot 23 percent overall and 10 percent from three-point range. It’s a bad combination when you get someone that hot and you shoot that poorly.”

Just like earlier, the Profs were able to bounce back with an 80-55 win at Ramapo College on Monday, then an 88-75 victory over Rutgers-Camden two days later.

Rowan continues to sit atop the NJAC standings with a 11-1 conference mark (17-2 overall). Despite the team’s control of first place, graduate forward Kate Matthews says that they aren’t getting complacent.

“We go in everyday with a mindset of the long-term goal, so we haven’t completed the goals that we want yet,” Matthews said. “We won’t be satisfied until the end of the season. We want to win the NJAC and move on to the NCAA Tournament.”

A one-and-a-half-game lead over the next team in the NJAC standings, Stockton, has the Profs in a comfortable position being in line for the No. 1 seed going into the conference tournament.

In order to stay on top of the conference, Rowan will have to avoid sputtering down the stretch, which caused the Profs to fall from 13-4 to 17-9 a season ago.

“We keep the energy level high during practice. We know we can be so much better because we haven’t played the best we can yet,” Schullstrom said. “We have to keep working toward our goals.”

Lisella turned to a familiar name to sum up how she is handling the team at this stage in the season.

“We’re focusing on getting better even this late. Mr. Rowan himself said, ‘I’ve never been content with the status quo. To my mind, satisfaction has always been the enemy of progress,'” Lisella said. “We’re nitpicking a little bit, tweaking some things with our offensive sets, just to keep it new.”