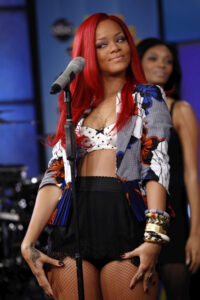 Rihanna’s latest album has surpassed all expectations and I am inclined to call it her strongest album of her career. Robyn Rihanna Fenty is a Barbadian singer, songwriter, and household name. Selling over two hundred million records, she is one of the best selling music artists of all time. After delaying the release of her 8th album for several months due to conflicts between songwriters and producers, Rihanna had been teasing her fanbase with promotional videos sponsored by Samsung and the TIDAL mobile application.

The top charting artist released dates for a world tour with The Weeknd and Big Sean last December. Tickets were sold out within minutes, despite the album being no where near completion. On January 27th, Rihanna released the much anticipated album, “ANTi” on TIDAL for streaming and free download. The artist used only her Twitter account (generously followed by over 55 million people) to announce the surprise drop.

And boy, was it worth the wait. “ANTi” is the sound we have been missing and wanting. Previously known for radio-friendly pop and EDM singles, “ANTi” is the outright flip-side. Showcasing the bad gal’s vocals, each track is coherent and cohesive to the sound and color Rihanna has finally found.

The first single of the album, “Work” featuring Drake is a bouncy, relaxed dance anthem quickly creeping up the charts. The catchy song gives a taste of Rihanna’s Barbadian background, a fusion of reggae and hip hop that gives a “hit the beach feel.” “Consideration” delivers a grimy feeling while “Yeah, I Said It” is sultry and sexy. Raw vocals accompanied by an 80s ballad guitar layered on top of a classical drum beat, “Love on the Brain” is arguably one of the best songs of the album. Filled with beautiful harmonies and giving “ANTi” the proper closure it deserves, “Close to You” is a piano ballad that reminisces Rihanna’s previous multiplatinum song “Stay” featuring Mikky Ekko.

To classify “ANTi” in a genre you would have to create a new one. It isn’t pop, it isn’t dance, and it isn’t EDM. The music has a smidgen of every style, thus designing and articulating a unique sound. “ANTi” is the “scream, smash everything you own, cry, and drive with no destination in mind” soundtrack to fit your dysfunctional, crazy life. Despite a lack of buzz and major promotion, “ANTi” went platinum in less than fifteen hours, selling one million copies.