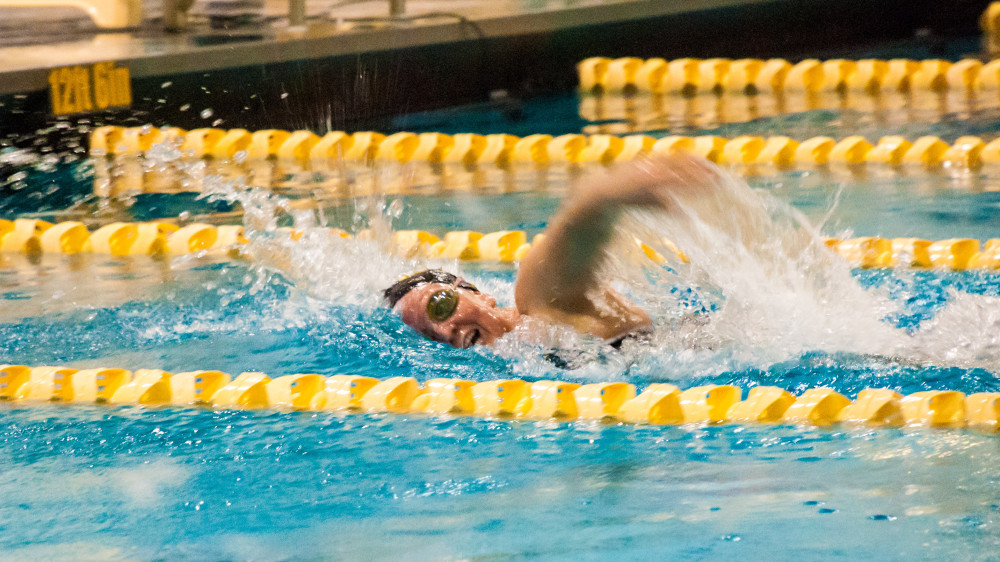 Rowan senior swimmer Julia DelNero frequently gets asked whether or not she ever sleeps.

For those curious, the answer is yes, she does, but not  much. With her intense workload, DelNero, a senior health promotion and wellness management major, rarely has any free time in her hectic schedule.

In addition to spending 20 hours a week in the pool, the senior standout also works at the Rec Center as a building manager, teaches group fitness, interns as a strength and conditioning instructor and somehow manages to find time for her friends, family and schoolwork.

“She’s hardworking, she’s a great individual and she will do anything to put herself in the right position to succeed,” said head coach Brad Bowser. “She’s so involved with planning for her future. Without a doubt, she is one of the few people that has put herself in the position to succeed in exactly what she wants to do for the rest of her life.”

But when DelNero first stepped foot on Rowan’s campus, she never imagined being in the position that she’s in today. She never pictured herself having a job on campus or having so much success in the pool.

At first, everything seemed overwhelming to her. Although DelNero had been swimming competitively since the age of six, college was an entirely new experience and presented some difficult obstacles for her—one of the biggest being the thought of swimming without her older sister, Nicole.

It was difficult for Julia to think of swimming without Nicole, who had been with her since her earliest days in the pool but did not continue with the sport. However, it didn’t take long for DelNero to see that she had stumbled upon a brand new support system and family.

“She had always been at my side, so swimming without my older sister was pretty hard,” DelNero said. “However, I came to realize that I had 25 other sisters on the team. Once I realized that, everything just became a lot easier.”

With the team, DelNero’s mindset and outlook have changed each season. She has become more confident and more comfortable in her abilities.

DelNero has been one of the biggest reasons for the Profs’ success this season. Whenever the team needs someone to step up, she delivers.

“She’s been a savior for the season. She wins events,” Bowser said.

As DelNero’s career winds down, her last remaining go around in the pool is the Metropolitan Championships (Feb. 19-21). Heading into this weekend’s multi-team event, the distance swimmer will participate in her favorite event, the mile, one last time.

The veteran has her own special way of mentally preparing for such a huge and demanding race.

“I try not to think about it,” DelNero said. “When I was younger I used to overthink it and work myself up over it. So now I kind of just put my headphones on, sit by myself, close my eyes for a little bit and picture myself in the pool swimming. Then I find a good song, listen to it a bunch of times and sing the same part of the song for 66 laps straight.”

Featured image: Julia DelNero competes in a race during her junior season. -File Photo from 2014-15