“[He] got a great jump to start the heat like he normally does,” said Anderson, the group’s anchor. “I knew right then it wasn’t going to be close.”

Rowan would win the 4×200 relay with a time of 1:31.93, beating out the next fastest team, host-school East Stroudsburg, by almost one second at the DeSchriver Invitational in East Stroudsburg, Pennsylvania on Saturday, Feb. 6.

“We can do better, a few of the baton passes were good, not great. We’ll be able to make 1:28 by the end of the season,” Anderson said. “We’ve been training hard as usual but our goal this year is nationals and that gives us the motivation to push as hard as we do.”

Days later, on Thursday, Feb. 11, sophomore Sam Maniglia placed first in the heptathlon at the Kutztown Mid-Week Multi, posting a university-record 4,197 points (he also set the previous mark of 3,487). Maniglia was the lone competitor for the brown and gold at the meet.

The Profs competed at the Molloy College Lions Invitational in South Huntington, New York on Friday. It was the team’s final meet before the New Jersey Athletic Conference Championships on Monday, Feb. 22. 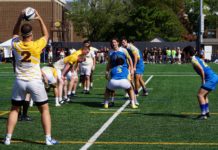 Rowan Rugby Loses Their First Match of the Season to Salisbury 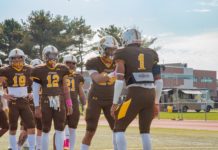 Rowan Football Looks for Their First Win on Homecoming Weekend 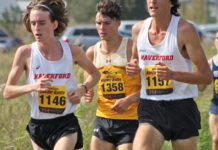