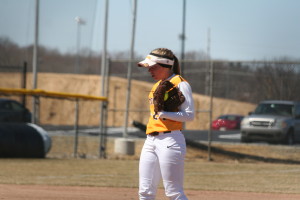 The Rowan softball team must have just needed to head south a few more states to find their groove. Their season-opening, 2-4 trip to North Carolina helped gain some experience, but hurt in the win column.

Rowan’s trip to Kissimmee, Florida, for the Rebel Spring Games, however, was successful in both facets. The team effectively righted their season, finishing on an eight-game winning streak and taking 11 of 12 games.

“We went out and played really well right off the bat,” head coach Kim Wilson said. “There were many games that I thought we did well, with different pitching and different lineups.”

To say the brown and gold dominated during their time in the Sunshine State would probably be an understatement. The offense raked in runs at a ridiculous clip, averaging over eight per game (8.25), while the pitching staff unearthed the dominance that had made them one of the most heralded units in the nation in the preseason, allowing just 1.5 runs per contest.

“We have a lot of variety I feel like,” senior pitcher Allison Nolan said. “MacKenzie [Juodaitis] and Beth [Ann Hyland] throw hard, and I’m going to come in there and mix it up a little, same with Rachel [Gagliardo].”

In 10 of the 12 contests in Florida, at least two pitchers tossed for the Profs. Four games featured three Profs’ pitchers in action. Juodaitis, who appeared in half of Rowan’s games in Kissimmee, earned New Jersey Athletic Conference Rookie Pitcher of the Week for her efforts.

Wilson said that using multiple pitchers was a plan she had wanted to implement to ensure that her pitching staff was getting enough live-batting experience, even if the majority of the games were blowouts. During the trip, the pitchers were asked to perform in various roles, such as a starter, reliever or closer.

The scary part of how the pitching staff has started is that Wilson wants more from them, and knows they can shift up another gear.

“We still have a higher expectation for them, that they need to keep improving and really taking it to teams,” Wilson said.

Speaking about the team as a whole, All-America senior shortstop Shilah Snead said that the Profs are only just beginning to get into stride.

Last season, Rowan used the Rebel Spring Games to springboard them into strong conference play where they won their next seven games, posting four shutouts in that span.

“As a team through the years, Florida is always like our big start,” Snead said. “From there we just continue to get better, and I think it will be the same thing this year.”

The Profs, tied for 20th in the NFCA Top 25 Poll, finally get to play their first game at home and on New Jersey soil when they host the Neumann Knights in doubleheader action today in Glassboro.

Neumann enters the game with hopes of snapping a seven-game losing skid. Though they have a 3-9 record overall, Wilson says that the Knights are “a better team than their record shows.”

Mainly for the Profs, it will be about continuing their stellar play and relishing in the home field advantage for the first time this season.