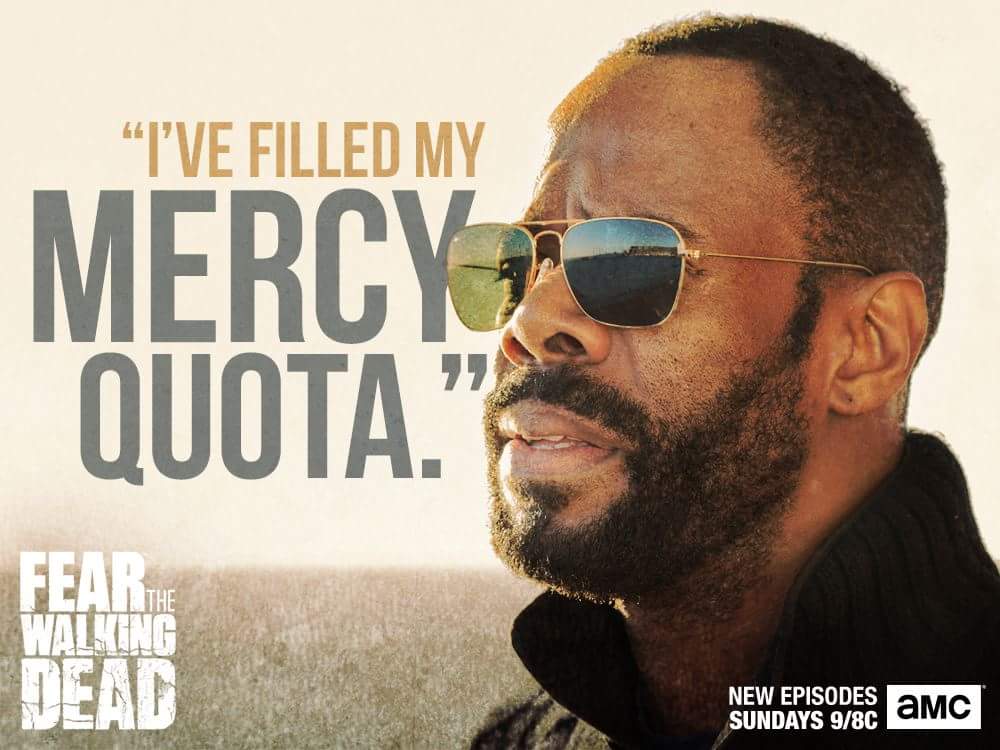 With civilization crumbling in the wake of the apocalypse, the second season of “Fear the Walking Dead” is officially underway.

As Los Angeles burns to the ground, the survivors in this new world take to the waters of the west coast, avoiding the raging hordes of the undead and chaos that follows them.

With all this in mind, here are the most important points from season two’s premiere, “Monster.”

The episode picks up right where season one left off, with Travis [Cliff Curtis], Maddie [Kim Dickens] and their families fleeing onto Victor Strand’s [Colman Domingo] yacht, the “Abigail.”

Looking out at the ruins of Los Angeles as military jets bomb the city, these survivors have no choice but to embrace the madness that has engulfed their lives.

As they make their way offshore aboard Strand’s yacht, they come across some refugees, who Maddie insists they take in.

“I filled my mercy quota,” he says to Maddie, disregarding the refugees they just drove past.

“If I stop the boat, it’ll be to drop folks off. Not to take them on.”

What’s fascinating about Victor Strand is that as callous as he is towards the living, he still manages to be one step ahead of anyone he interacts with. Since he met up with Nick [Frank Dillane] and the rest of his family last season, he’s been making sure to have his bases covered, ensuring his own survival.

This early on in the apocalypse, one would think he would fall into the same hysteria that humanity has been thrown into; yet, he still is capable of holding his own. It’s awfully suspicious that a man of his standing has this much of a plan in place in the midst of the apocalypse, however, his impatience for the human element seems to be his Achilles’ heel. If Strand has a change of heart — or if the other survivors come to blows with his views — time will only tell how long they’ll last.

Through this episode, both Chris [Lorenzo Henrie] and Alicia [Alycia Debnam-Carey] have been examples of what effect LA’s destruction has had on everyday life.

Chris’ mother, Lisa [Elizabeth Rodriguez], was killed by Travis last season when she was bit, reluctantly having her ex-husband end her life in the process. Chris and his father come to blows on the boat after they give his mother a burial-at-sea, but it’s becoming increasingly obvious who is capable of coping and who isn’t.

Alicia has been given the task of manning the yacht’s radio, listening in for any signs of life left on the mainland. One by one the signals begin disappearing, all with one thing in common – humanity is falling. The voices echo the same cries for help against the undead, all to no avail.

She listens in until a voice comes on the radio, pleading for help. Naively, she gives away the yacht’s position, to which the voice responds, “We’ll see you soon.”

Meanwhile, the crew of the “Abigail” discovered the wreckage of a ship, one that was decimated by other survivors out on the water.

Through the ship’s radar, they discover that they’re not alone, and are in grave danger. Another ship, presumably the one that sunk the same vessel they discovered, is closing in on their location.

If there’s one thing that Travis and the others have to learn, it’s that the dead aren’t the real threat: it’s the living they have to fear.

With this hostile vessel closing in on the “Abigail,” the threat of people outweighing the threat of the undead hordes is somewhat of a throwback to the early days of the “The Walking Dead.”

These people aren’t the type of survivors that we’re used to seeing on “The Walking Dead.” They make mistakes, they don’t understand the new world around them and they’re more human than their counterparts on the parent show. While their experiences will turn them into hardened warriors in this desolate world, for now we have to give them the time to grow and mature.

Going into its second season, “Fear” is a nice step back from its comic-based counterpart. Not having the slightest idea of what’s to come is a relief, given the abundance of hit television shows with vivid source material.

With unknown threats closing in around them, the next installment of “Fear the Walking Dead” will be a true test of survival for everyone aboard the “Abigail.” Dealing with the undead is a challenge in itself, but dealing with living, breathing threats may prove to be the group’s undoing.

– Featured image: Victor Strand stands guard over his yacht, “Abigail,” staying one step ahead of the apocalypse. In this episode, they realize that the undead aren’t the only threat. -Photo Courtesy of “Fear The Walking Dead” Facebook Page