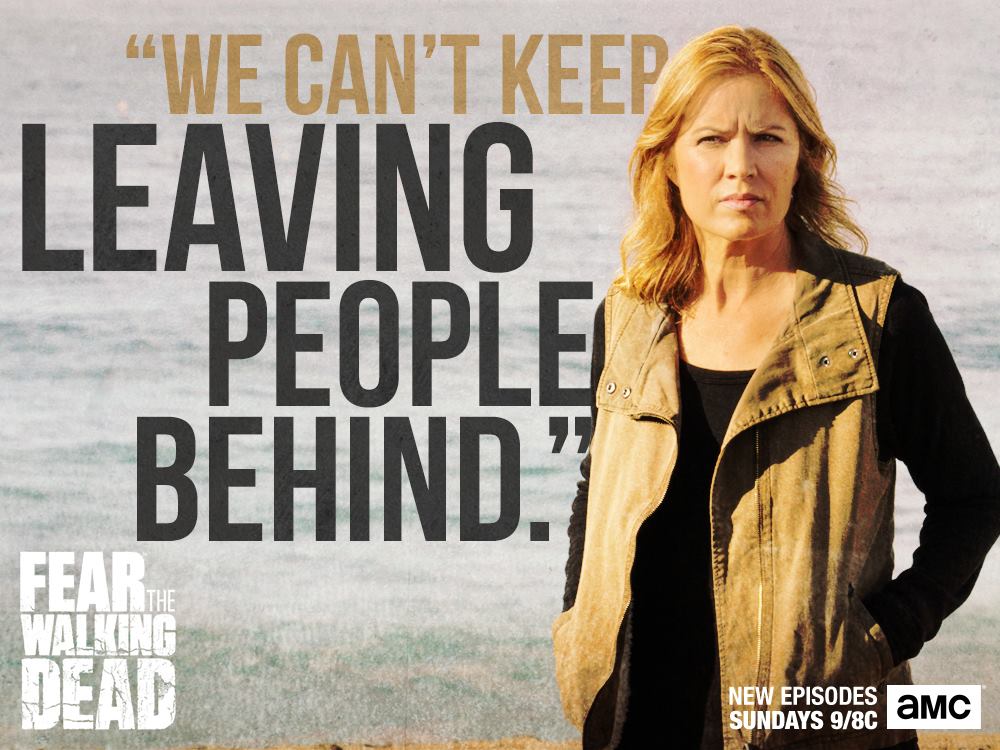 After the “Abigail” fled its pursuers this week on “Fear The Walking Dead,” the survivors in town made for a safe haven they had discovered on Catrina Island.

While this may come as a sign of hope for some, not everything is as calm as it seems. In season two’s second episode “We All Fall Down,” we get a glimpse at other lives in the apocalypse. Here are the most important points from this week’s installment.

The episode opens with Victor Strand [Colman Domingo] and the others desperately trying to dock and escape their pursuers, who were unknowingly attracted through Alicia’s [Alycia Debnam-Carey] conversations with them through the yacht’s radio.

As they survey the travel log that Nick [Frank Dillane] procured from a wreckage they came across last week, they discover that many major cities along the west coast have been destroyed in the chaos.

It’s at this point that the group sees a light go off in a house on Catrina Island, which was a wildlife refuge prior to the apocalypse.

They dock the “Abigail” at the island, while Travis [Cliff Curtis], Maddie [Kim Dickens] and their family attempt to to befriend another family who had been surviving in the park.

They meet George Geary [David Warshofsky] alongside his wife Melissa [Catherine Dent] and their family who had been living out on Catrina Island’s campgrounds. However, they were here long before the world faded into darkness, having used the island’s natural borders to fend off any undead presence.

“It’s a question of surrender or survival, acceptance or denial,” George explains to Travis, affirming with his new guest that only death is certain in this new world.

We learn from George’s communications with other ranger stations that the infection has spread north to Vancouver and traveled east into Colorado, while Mexico has closed its border with the United States.

It’s interesting to see how life outside of Los Angeles has fared in the apocalypse and how quickly society has come tumbling down. Compared to the sudden immersion into the end of the world that “The Walking Dead” gave us in its first seasons, “Fear the Walking Dead” is adding a broader perspective of society as it falls, piece by piece. The only thing certain about this show is its ability to draw from the unknown and create stories about people — not just hardened survivors.

It becomes clear through George’s uneasy demeanor there is something off about his family’s life on Catrina Island.

Harry [Jeremiah Clayton], George’s younger son, was seen playing with action figures that had red sharpie drawn on their foreheads. Each of these figures represented people he had known as the infection spread who had to be killed. He also talks about these “power pills,” which George says will keep them together and be strong if they’re ever in danger. This acceptance of death and the world around him gives a very bleak look as to how children are faring in the apocalypse, showing that innocence can’t last.

Nick, while bonding with George’s youngest daughter, Willa [Arya Lyric Leabu], comes across the “power pills” that Harry had mentioned earlier. Given his background of drug use and abuse, he deduces that these pills are some sort of poison.

He takes the pills he discovered to Travis and Kim, and thinks George has plans on “Jonestowning” his family if their home becomes compromised. The mere thought of this is terrifying, especially given that he’d not only be killing his family but condemning them to reanimate as walkers and stalk the Earth.

Strand, meanwhile, reached out to an unknown contact via satellite phone, confirming their vessel’s next port of call — Mexico. Why Mexico is unclear, but it’s apparent that Strand is ahead of the curve yet again and has some sort of endgame in mind to further his own survival.

Travis, Maddie and Nick decide it’s best to leave Catrina Island as soon as they can, having discovered some of George’s suspicious “power pills” in one of the park’s offices.

Travis and Maddie decide to take in their children at their mother Melissa’s request, only to discover that Willa took one of the pills and wasn’t moving.

As Melissa tries to wake her deceased child, she reanimates as a walker, attacking and killing her mother.

They bring Harry out to the boat, knowing the island is a lost cause. Strand vocally objects to the very prospect of bringing any additional people on board — let alone children.

“Kids are the definition of dead weight,” he says, still asserting his control as captain of his yacht.

Harry’s older brother Seth [Jake Austin Walker] comes to his aid, insisting to the crew of the “Abigail” that he can take care of his brother, even as their reanimated mother shambles down the dock towards them.

The scene ends with Harry waving at Maddie and the others while Seth executes his infected mother.

While family can prove to be a uniting factor in the new world that Travis, Maddie and the others have been sucked into, family can also tear people apart.

What’s interesting going forward with “Fear The Walking Dead” now is that with their journey traveling south of the border, nothing is certain. There are still threats of other people along the coast, as well as the undead’s numbers spreading throughout the country. Even with a survivor from the miniseries “Flight 462” that aired during commercials in season six of “The Walking Dead” joining them in the coming episodes, there’s no telling what’s in store for the next few weeks.

The fear of the unknown this show prides itself on will ultimately be a key factor in the coming season. With its renewal for a third season recently confirmed by AMC, there’s unlimited potential for this show to evolve into a powerhouse of its own.

– Featured image: Madison Clark pleads to the crew of the “Abigail” to take in more survivors. Meanwhile in this episode, they come across a family who had been surviving on Catrina Island off of California’s coast. -Photo Courtesy of “Fear The Walking Dead” Facebook Page