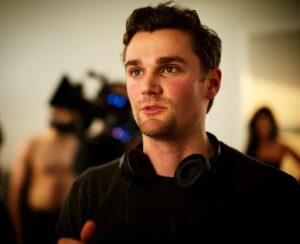 In his life Blake Rice has been called a “filmmaker,” an “actor” and “genuinely funny.”  Now his most recent label, “professional comedian” is bringing him back to Philadelphia on Saturday to perform his first stand-up show since last August at the Hard Rock Café.

As a radio, television and film major, Rice graduated from Rowan in 2012 and has since acted in films and commercials, directed and written sketches and short films, and, as a stand-up comedian, headlined at venues such as the Broadway Comedy Club and the Metropolitan Room in New York City, and of course, the Hard Rock Café.

Although the 26 year old has arguably made the big time, Rice’s life in entertainment traces back to summer camp and school projects.

Rice, the third child of four, was born in Voorhees and grew up in Moorestown. During a summer at Camp Pasquaney in New Hampshire, 12-year-old Rice tried acting for the first time in camp plays.

His first experience with amateur filmmaking happened a few years later, as a student at Moorestown High School.

“Whenever we had the opportunity to create a video project instead of doing an actual project or essay, I would choose the video project because I could goof around with my friends,” Rice said. “After doing things like that, I thought, ‘this is actually awesome.’”

In college, Rice got involved with the Cinema Workshop, the student filmmaking club. Club advisor and Film Production Coordinator Sean O’Leary, who acted with Rice in a student-made comedy film, recalls Rice as being “genuinely funny.”

“Blake played the character of the funny friend, which could have been really disastrous,” O’Leary said. “You watch a lot of student films and those things can be pretty overwrought. The funny friend character can be more annoying than funny. But, I remember thinking Blake did a really great job of selling the role and making it funny, and not irritating.”

While at Rowan, Rice befriended his self-described “much funnier” partner in comedy, Ricky Ryan.

“I met [Rice] at a house party,” recalled Ryan, a 2012 graduate in public relations. “He was very cold and hungry, rummaging through a wastebasket. So I offered him an old sweatshirt, a cup of onion broth and a person to talk to.”

“[It] was us figuring out a way to take what we thought was funny and get it on camera,” Ryan said. “We had many channels and resources thanks to the school.”

Their senior year, Ryan and Rice heard that comedian T.J. Miller was going to put on a show at Rowan. They immediately contacted Miller requesting to be the opening act. Miller agreed to give them a 10-minute spot, only asking that they not “bomb” before his performance.

“It was fun stepping into the world of a mind we admire, learning from a master of his trade,” Ryan said of opening for Miller. “And, honestly, we riffed.”

Rice spent his senior year, and the months following his graduation, commuting back and forth to auditions in New York City. Eventually, he got spots in commercials for Canon cameras and Stella Artois, as well as for brands of Swedish yogurt and Japanese doughnuts.

“Crushing the international breakfast food market,” he said of the latter two.

Rice’s first feature film role was in the 2014 Brazilian biopic “Tim Maia” about the eponymous musician. He played the role of Max, Maia’s friend who lived in New York City.

Acting in small roles gave Rice a place to begin building his career.

“You can’t just walk into New York City and say you want to be a director, you got to get your foot in the door somewhere,” Rice said.

His official directorial and screenwriter debut was with “To Whom it May Concern,” a dark, dramatic short feature film.

“It’s just the polar opposite of my stand-up comedy,” Rice said.

Currently in post-production, “To Whom it May Concern” should be released at film festivals early this summer.

Between auditioning, acting and directing, Rice has found an audience for his comedy, which spans such subjects as relationships, the hardships of being a middle child, and “how dumb men are.”

“Comedy is trial-by-trial— my first shows were horrible,” he said. “You train and you sharpen tools and you learn joke structure, but at the end of the day your personality is still there.”

In his future, Rice joked that he sees “a horrible, drug-infused stupor” ending “in the bottom of a dumpster in Glassboro.” He enjoys the creative freedom of writing and directing his own material, and he plans to continue acting, performing stand-up and making films.

“As long as I’m putting myself in positions to be creative, I don’t see myself ending up anywhere else,” he said.