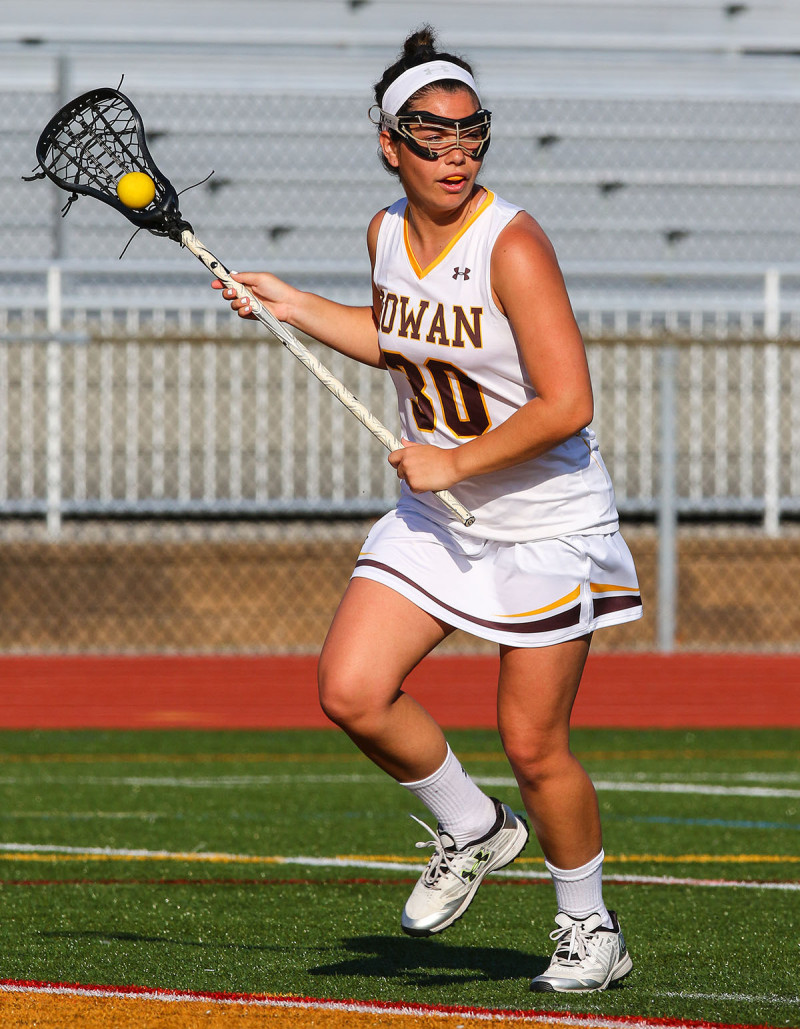 Everyone would like to believe that the path to success and happiness is a short and direct one.

However, most of the time that trail is not short or direct. It is long and winding, riddled with obstacles and pit stops.

This path is one that describes how Rachel Emerson found herself at Rowan University and as one of the captains for the women’s lacrosse team in her final season.

Emerson, a senior attack, has played for the Profs since 2014. She is a senior athletically, but academically, being in her fifth year of college, she is what is commonly referred to as a “super senior.”

Rowan is not the first four-year institution she has attended either; Emerson originally committed to play at East Stroudsburg University of Pennsylvania, a Division II program, in 2012.

“[I] played lacrosse there my first season, then transferred here,” she said. “I wasn’t able to play my first year here, but I’ve been playing the past three years.”

Part of the reason that Emerson went to ESU before making her way to Rowan goes back to when she was coming out of Moorestown High School. Emerson was not even a thought for the Profs. Head coach Lindsay Delaney explained that she was not someone they recruited, nor had on their radar because of her skills.

“She was never looking at a Division III institution, it was always small Division I or Division II schools. Girls from Moorestown aren’t usually on our radar,” Delaney said. “We just got fortunate that it was a bad fitting with her at East Stroudsburg. She should’ve always been here and she’ll tell you that.”

Moorestown, located in Burlington County, is regarded as one of the top lacrosse schools in South Jersey. The Quakers are currently ranked third on NJ.com’s Top 20 for girls lacrosse.

Emerson said that going to a high school with such an intense, successful program — where a lot of players go to the DI level — has helped her in college.

“The coach, Deanna Knobloch, was great,” Emerson said. “She taught us about commitment, dedication, all of that, to a program. Coming from that intense atmosphere has made me want the same thing coming to college.”

Where East Stroudsburg lacked this edge, she found it among the brown and gold.

“When I got to Rowan it had that feeling,” Emerson said. “The team was very close, we all bonded really well and that helps on the field working together. [At ESU,] I didn’t really get the feel as well as I thought I did for lacrosse and outside of lacrosse.”

Since coming to play for the Profs, Emerson has seen nothing but success.

During the 2014 season, Emerson started in each of the team’s 18 games, registering 21 goals and seven assists. The next year she was even more productive, upping her output of goals (24) and assists (8) in one less game played.

Now in her third season with the brown and gold, Emerson has nine goals and an assist through eight contests. She is also a team captain once again, part of the Profs’ “leadership council.”

“Nothing about her play is sloppy, so I think that’s why she leads so well,” Delaney said. “People know she understands the game well. She calls the plays and she has no problem taking ownership of things.”

East Stroudsburg was not the right fit. Emerson, through laughs, said she realized soon that Rowan was a much better spot for her.

Sitting at her desk behind the senior, Delaney nodded her head in agreement.

“Rachel’s always smiling even if she’s mad. Sometimes that makes people think she’s a pushover type, but she’s very feisty,” Delaney said. “She wants what she wants when she wants it. She’s so consistent, people breathe better when she’s there.”