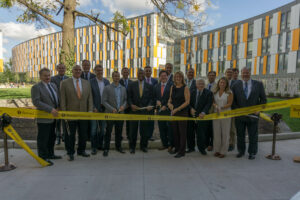 Several speakers, including Rowan President Ali Houshmand, christened the new freshman and sophomore housing complex with praise for the teams of architects and designers that made the project a reality, as well giving high hopes for the students who now reside in the 303,000 square-foot commons.

The complex houses over 1,400 residents and is organized into several pods which contain student bedrooms, lounges and study spaces for its residents. The project cost around $140 million to build and held its groundbreaking ceremony in spring 2015.

With the help of University Student Living, a private contractor, and its president Joe Coyle, the project came to fruition within approximately 14 months of construction. Coyle says this is “phenomenal” for a project of this size.

“It is definitely different. A lot of it had to do with how we were able to fit the scale of the building on a relatively limited lot size,” said Rowan Senior Vice President, Donald Moore regarding the logistics of the Commons. “We wanted it to be creative, we wanted it to have capacity also, to house as many students as we possibly could. We didn’t want to have anyone who was excluded.”

The inclusive aspects of the Commons embrace a gender-neutral ideology which is evident on the many floors and restrooms. Students living in the dorm have been allowed to select their own roommates without restrictions based on gender and each set of men’s and women’s restrooms are located next to or near a gender neutral restroom as well.

University President Ali Houshmand likened the building’s curve and grassy courtyard to a hug. He believes that the Commons will help create a sense of community for students.

“Because of the shape and the architecture of it it really is inclusive, it is like you are hugging,” he said. “People are going to congregate in here in order to meet each other and that is the beauty of it. I can imagine one day there will be a beach volleyball court in here, or people having barbecues, or loud music right in the center where hundreds of kids are dancing. That’s what I’d love to see.”

The University of the Future According to the Division of Diversity, Equity and Inclusion

Rowan’s Policy on Cannabis Explained, Why the Rules May Seem Unclear

President Houshmand Commended, Honored and Recognized for his Work at Rowan