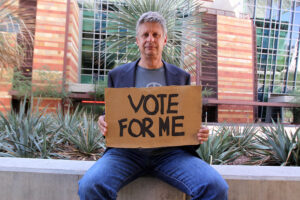 This is an installment of Matt Kass’ weekly political opinion column “Left, Right, and Center.”

It’s hard to figure out who had a poorer week. On one hand, after seven months of having to wallow in his Super Bowl loss, Cam Newton went out and had to watch the Denver Broncos beat him and his team – again – and he probably sustained a concussion while doing so, adding a very literal injury to insult.

On the other hand, you have Libertarian presidential nominee Gary Johnson who probably torpedoed what slim chance his campaign had to make it onto the debate stage. He can thank the Syrian city of Aleppo for that.

During an interview on MSNBC, Johnson was asked a question about what he would do, if elected, to address the humanitarian crisis in the war-torn Syrian city of Aleppo. His response was all of four words, but it was incredibly telling.

“And what is Aleppo?” he asked.

Four incredibly simple words which hit with the power of a Von Miller helmet to the head. Immediately after he spoke, there was a sense of incredulousness from the anchors.

Whether or not Johnson knows it, foreign affairs are a huge part of the campaign this year. Immigration from Syria has been a major issue, with Trump using American fears of radicalized Muslims entering the country to stoke a white-hot anger in his voting base. Another issue to remember is that the generation who grew up with an endless war against an undefined enemy are now mostly of voting age.

I count myself as one of that generation, and I need to know that any candidate in the race has at least rudimentary knowledge of foreign policy. I don’t need an “oops” moment, or a question about where the city is or what is happening in the region. I need concrete answers about what they would do, even if I disagree with the way they would do it.

There’s a long history of candidates messing up in the general election. That image of Democratic nominee Michael Dukakis riding a tank in 1988 comes to mind. So does putting Swiss cheese on a cheesesteak (it’s one of the reasons we don’t refer to John Kerry as Mr. President). And who can forget the leaked “47 percent” video that showed Mitt Romney talking disparagingly about American voters. But for the most part, major party candidates can survive a gaffe or two.

Not so for a person running as a member of a third party.

The very nature of a third party candidate is that of an outsider. They need to run a flawless campaign, and grab at least 15 percent support to grace the debate stages come the fall. The first debate is on September 26, less than three weeks from now. At the moment, Johnson is hovering around 10 percent in the polls.

All of this means that, in theory, every time a third party candidate is given a spot in the limelight, they need to do a spectacular job. And what Johnson did was the opposite of that. The voting public of today has a short memory. And if Gary Johnson doesn’t crack 15 percent, he may wind up getting pushed to the dustbin of has-beens. Yet another third party candidate who had a good show, but will only be leaving with a lovely parting gift from our sponsor.

I can’t help but feel like Gary Johnson just fumbled late in the second half with his team driving. With the chance to pick up a sizeable chunk of voters disillusioned with the current two party system, Johnson showed exactly what he didn’t know, and in the end, just like Cam Newton and the Carolina Panthers, he will likely come to regret yet another missed opportunity to score.

Editorial: To Mandate or Not to Mandate COVID-19 Vaccination