Guiseppi’s Restaurant & Cocktail Lounge is a little corner spot on the bustling Black Horse Pike in Mt. Ephraim, N.J., right before the Walt Whitman Bridge carries you into Philadelphia.

The facade is a fitting foreshadow for what the lounge – a glorified dive bar, really – holds inside. The small brown awning wrapped around the beige, stone building has clearly been left neglected for an extended amount of time, and is in desperate need of a power wash. The yellow neon sign, which should be a beacon for the restaurant to attract customers, does not light up in the darkness and instead hangs uninspiringly.

But, like a mature man does, I looked past the brash exterior in hopes of peeling back a layer to find a more welcoming interior that would change my mind.

My hopes were dashed.

I walked through the glass door on the side of the building (the front door on the main street is out of commission), and entered a small vestibule with a pay phone and lined in astroturf.

On the other side of the vestibule was a wooden door that opened up to a horseshoe shaped bar with an eclectic assortment of barstools surrounding it.

I sat on one, and was approached swiftly by the bartender. He immediately bypassed the thought that I was there for a lunchtime meal, and assumed I was there for a lunchtime beer. I wasn’t sure how to take this. Was it so unfathomable that someone came to this establishment to eat, or did I look like I desperately needed a drink at noon on a Thursday? Either way, it wasn’t a good look.

I asked for the menu, and decided to test the essentials of a Philly-area bar. I placed my order of 10 hot wings for an appetizer, a cheesesteak with fried onions and a cheese pizza for the entree.

With just a few patrons in the bar I assumed the food would be delivered to me with haste. I was wrong. I waited over 30 minutes for the food, and no explanation was given to me about the lengthy wait.

Guiseppi’s may be one of the only carpeted bars in existence.

I tried the wings first. They had a nice crisp to them, which sometimes proves to be because they were left in the fryer for a tad too long. Not these wings. The chicken on the inside was still tender and ripped off the bone easily. The hot sauce wasn’t overwhelmingly hot, but it lacked a signature punch that I like to have in my wings. They were cooked well, but the sauce that was garnishing them was bland, and didn’t entice me to rifle through them.

Unfortunately, because I went for the wings first, I left the cheesesteak practically floating in a vat of grease. When I picked up the sandwich for my first bite the bottom of the roll collapsed due to saturation, and a fair amount of the meat fell out. The cheese was melted, but it was melted onto the sides of the roll instead of mixed in with the steak, and the onions were still too undercooked to be considered fried onions. The grease took away any hope of flavor from the meat, and made the sandwich nearly inedible.

Finally, I was left with the pizza as my final hope. That hope was quickly shot down. I think it may have just been a frozen pizza from a local grocery store. There is no way the pizza was baked fresh.

The food was overall unappetizing, and the atmosphere didn’t make up for it – Guiseppi’s may be one of the only carpeted bars in existence. It seems that management knows about the low-quality food and prices it accordingly, as my final bill came to be just under $35 including tip.

Free parking in parking lot behind the building

The Student Side: The Destructive Self-Hatred of Cheating 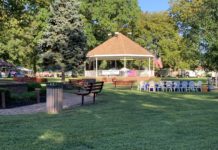