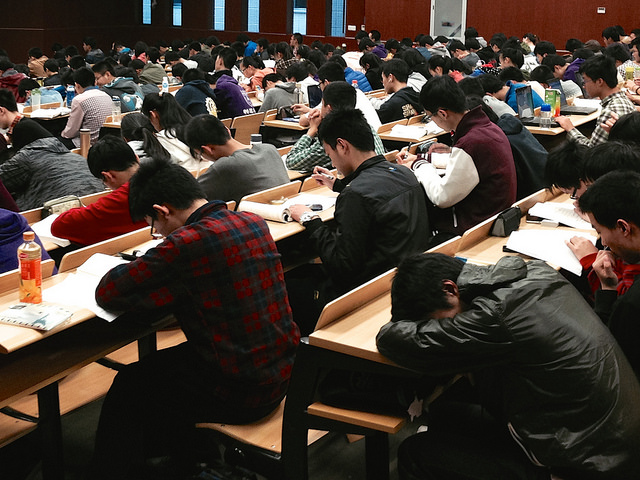 I’ve heard it. You’ve heard it. Hey, maybe you’re guilty of saying it. Regardless, this line is about as overused as “Netflix and chill” and comparing food to “bae.”

Ironically, the person saying this probably has their eyes glued to their phone while they scroll through an endless Insta feed. Believe it or not, there are people who really don’t have friends. Take me for example. I, Breanna Ruiz, don’t have friends. Now I don’t mean that sarcastically; I’m being for real. At 21 you would think my social life would be at its peak, but nah. My life is like “Kate Plus Eight,” but my eight kids are named work, school, gym, anxiety, depression, bills, homework and sleep deprivation.

I imagined college was going to be like a late-90s movie. The campus was going to be flooded with people. Frat boys would be bro-ing it up over some beer pong, sporting their popped collars and backward hats. Barefoot hippies were going to be strumming and drumming by a dope oak tree. Except, after two years of community college and a semester of commuting to Rowan, college hasn’t exactly been the rom-com I expected. As a working student, most of my classes are either at night or online. In fact, walking on campus is less like “American Pie” and more like “The Walking Dead.”

For me, walking into class is like stumbling into a stranger’s funeral. Everyone has their heads down, people look completely miserable, and the room is dead silent. After the professor gives the eulogy, the sounds of slamming books, fast-moving zippers, and the click of unlocked phones fill the air. With our heads still down, because technology has heightened our sense of spatial awareness, students scatter out the doors.

But I’ve had enough. A semester full of the same boring routine has brought me to the edge. We can’t drop everything we have going on, but we can switch things up. Here are a few simple ways to survive your social drought.

Snap Out of It: For god’s sake, pick up your head for a second! Take a look around you. Stop walking down RoBo watching snaps about the nice weather when you could actually be enjoying it. Try sharing a smile, a wave, or a chill head nod with a stranger. Quit isolating yourself and tweeting #foreveralone, and acknowledge the people around you. Less time on your phone means more time to talk to that hottie that asked you for a pen five weeks ago. So instead of ‘sliding into DM’s’ late at night, start a real life conversation.

go to that birthday party you’ve been stressing about. Worst case scenario you hate it and go home, but maybe, just maybe, you have the time of your life.

You’re Not Saved by the Bell: We’re not in high school anymore, people. We’re not forced to be around the same people five days a week. In college, cliques are irrelevant and there is zero pressure to be popular. With that being said, it is up to you to socialize. Friendships don’t have to be defined by a top five, BFF bracelets, or how much you hang out at the mall. Try not to push people away because you’re convinced you’re too busy for friends. Take baby steps and make a study buddy or join a club. These social interactions may seem small, but the break they give your brain from your hectic life is major.

Break Out Yo’ Shell: Quit telling yourself you’re too shy or awkward to socialize. Instead of holding yourself back by saying, “That’s not my scene,” consider giving it a try. Believe me, I know how difficult it can be. I can hold a conversation. Let’s talk about the weather, the quiz, your cool shirt, my cute boots. We can have a delightful exchange of witty banter. But as soon as I get hit with the “Hey, we should hang out sometime,” my hands clam up, my heart drops, my cheeks clench (and I’m not even talking about the ones on my face). Yup, I panic. I am the master of canceling, and avoiding social situations is my greatest skill. But living like a stressed-out soccer mom, when I don’t even have kids, has made me realize you only live once. And heck yes, I just YOLO’d. I’ll hate myself later but right now I’m living ‘hunty, yas!’

So say yes to that cup of coffee and go to that birthday party you’ve been stressing about. Worst case scenario you hate it and go home, but maybe, just maybe, you have the time of your life.

If you need some extra help, stop by the Office of Student Activities and find out what’s going on at Rowan and how to get involved. Not everyone’s a social butterfly, but every awkward caterpillar has the ability to change … it just takes time.

Features Editor’s note: Social anxiety is not exclusive to commuters, and these tips can help students of all types. However, commuters have an extra obstacle they must overcome: they are separated from campus during times when students inadvertently bond, like during dinner in the cafeteria, in study groups, and at RAH and other late-night events. Making friends and having the full college experience requires extra work for commuters.