The six goals for Rowan were split between freshman Bobby Penrod and senior Connor MacEwen, both tallying hat tricks.

But, the story of the night wasn’t necessarily the win on the ice, but the crowd that circled it.

Friday night was “Alumni Night” at Hollydell, when a large group of former Glassboro State and Rowan ice hockey players pack the stands and turn the rink into one of the most lopsided home-ice advantages around.

“The energy was amazing,” said head coach John Caulfield. “I didn’t have to do much. The kids felt the energy as soon as they walked out here. They were buzzing tonight.”

Cheering and heckling by the alumni section would’ve made older fans feel as if they were sitting in the 700-level at “The Vet,” Philadelphia’s old multi-purpose stadium. It was a feeling that both the players and coaches were engulfed in. But it was the officials that captured most of it, and not in a good way.

The biggest moment occurred before the game, when it was announced that, due to technical difficulties, the national anthem would not be played.

Instantaneously, the section of Rowan die-hards broke out into patriotic song. The officials and players delayed the opening face-off with veterans saluting as the fans led the way, bringing some love-filled laughs to the sidelines.

“Maybe not the greatest singing in the world,” Caulfield said. “But we aren’t criticizing them on their singing. That was awesome.”

The first period went scoreless, although the Profs were able to pressure the Hokies with plenty of shots. Early in the second, the scoring opened up. Penrod and MacEwen began to alternate goals for Rowan, eventually ending with their respective hat tricks.

“Getting the hat trick was amazing,” Penrod said, who notched the first three goals of his college career. “To do it here at home in front of the alumni, it’s a great experience and a great way to start the season.”

For MacEwen, he has had no problem finding the back of the net, as he now has five goals in the first two games. After only scoring one goal last year, he hopes to continue to ride this early hot streak.

“I had a rough year last year,” MacEwen said. “Being older, being more adapted to the game, I’m flying out there, and the new guys bring a lot of energy so that helps.”

“I loved the way we played tonight,” Caulfield said. “It was a tremendous effort by the kids. They are buying what we are selling and it’s working out nicely.”

The Profs stay home for a game next Saturday at 8:15 p.m. against the University of Maryland. 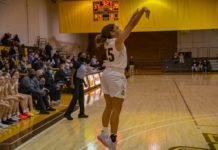