After dropping their first meet of the season against New York University, the Rowan men’s swimming and diving team won four consecutive meets, including two in a row against New Jersey Athletic Conference (NJAC) schools. The Profs defeated William Paterson University 168-73 this past Friday and Ramapo College 186-76 on Saturday. Divers took on West Chester University on Saturday, where Chad Shire placed third in the one-meter diving with 225.90 points. Shire also took second in the three-meter diving with 239.70 points.

For fourth-year head coach Brad Bowser, meets are almost already predetermined once you walk to the pool.

The brown and gold have a tremendous amount of youth on their team, with 17 of their total 29 total roster spots filled by underclassmen. Sophomore Jacob Kayati and freshman Dylan Regan have two of the top three performances thus far in the 50 free behind senior captain Eric Feuerstein. Freshman Matt Smits the second best performance for Rowan in the 50 back. Sophomore Matt Grubb has a top time in the 100 breast. Freshman Oliver Cruz also has the second best performance in the 100 fly.

“For as young as a team as we are, having 11 newcomers, it took the seniors a couple weeks to mold them and get them to understand,” Bowser said. “I think right now things are starting to click. I’m really positive how the last four or five weeks have gone since we’ve started our season. Now, it’s just getting ready for Worcester and WPI (Gompei Invitational).”

Despite the vast amount of inexperience, it’s clear to see that the underclassmen have performed nicely to start the season. But, for Bowser, the adjustments year in and year out in order to fill spots that were left vacant by seniors are simple: build a better program despite your key losses.

“Adjustment-wise, it’s been trying to strive for a better program and bringing in recruits that are better than what’s leaving,” he said. “We are never going to be able to do that because having an 18 year-old boy matchup with a 22 year-old boy, unless they are a standout swimmer, aren’t going to able to do it. We’ve tried to continue the philosophy of hard work and true determination will get you better. When that happens, you’ll see your kids that develop and become a strong force.”

The Profs head to Pittsburgh, Pennsylvania for the CMU Diving Invitational on Friday and Saturday. After Thanksgiving break, the team takes on the WPI Invitational on the weekend of Dec. 2. 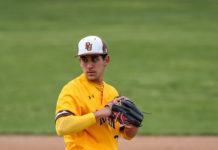