Sean McGaughey marched his Widener squad inside the nine yard line for a fresh set of downs as triple overtime loomed overhead a game creeping in on three hours of play. After two plays and a gain of four, the Pride faced two more chances to gain five yards and play another quarter.

Kyle Pierce had other ideas.

Rowan’s senior linebacker broke up both Widener passes on third and fourth downs to bring the epic game that was Rowan’s season opener to an end. Profs finished on top, 41-34.

After an uncharacteristic losing season in 2017, the brown and gold couldn’t have asked for a better start to the season… well, maybe one that didn’t take so long.

But, a win is most certainly a win and that is all that matters. With the victory, Rowan has now won their fourth consecutive season opener with all four being against the Pride.

The scoring commenced just under six minutes in, when Widener halfback Donte Harrell took a pitch from the 1 yard line into the end zone. Rowan junior wide receiver Elijah Rehm ran back an 83-yard kickoff just seconds later to tie the game. Rehm’s impact was felt again late in the fourth quarter as he brought another kickoff return to the house to tie the game at 31-31; this one for 100 yards.

The first bout of overtime ended after both teams were able to muster field goals together to head into double overtime 34-34.

This is when the running committee that combined for 328 yards on the night sealed the deal for the brown and gold.

After picking up a first down, senior John Mannion brought Rowan to the Widener four yard line. Senior running back Anthony Diorio capped off the double overtime drive on the ground the next play, proving to be the deciding factor of the game.

In addition to sound blocking on special teams, Mannion ran for a career-high 177 yards, averaging 7.4 yards a carry and returning a punt for three yards.

Senior defensive end and team captain Kevin Stokes was in McGaughey’s path all night, while fellow defensive lineman David Gajderowicz had an impressive night, with 2.5 sacks and 8 tackles.

In his Rowan debut, quarterback Riley Giles played a turnover-free game. For the night, he only had to throw it four times on third down, going 11/15 overall, with 88 yards and an 8-yard touchdown pass to Cody Madden. While Giles missed some throws downfield, overshooting receivers a bit, the fact that he was able to stay in the pocket and make smart, accurate throws and refrain from turning over the ball was instrumental in his victory.

Madden led the way in both catches and receiving yards, hauling in 4 for 40 yards, while Nick Grosso made a beautiful, and controversial, leaping 10-yard catch to just stay in bounds nearing the end of the fourth.

Controversy ensued moments after that when Giles scrambled out of the pocket, ran 18 yards to the Widener 23-yard line and out of bounds on the last play of regulation. As he was about to enter out of bounds territory, he was tackled and brought to the ground by Widener defensive back Brian Armstrong, which should have resulted in a penalty.

If the penalty was properly called, either unsportsmanlike conduct or pass interference, not only would the game have continued despite the clock striking zero, but 15 penalty yards would have been tacked on, giving Rowan kicker Alex Boyko an 18-yard field goal attempt to win it at the buzzer.

Regardless of the win, Rowan head coach Jay Accorsi said he would report the referee’s incident to the NCAA for an explanation, which was not provided after the play ended. This is allowed to take place after games end.

Rowan’s third down woes from last year continued into this opening game, perhaps due to a mix of rust and all the new transfers and rookies. The Profs were a combined 3/15 on third and fourth downs. Both teams had well over 400 total yards, as the Pride outgained the Profs slightly, 449-416. However, special teams were the key to victory, as Rowan nearly had 300 total return yards.

The biggest problems for Rowan were their penalties and lack of discipline, especially early on. The brown and gold had five first quarter penalties and five false start penalties, accumulating 11 penalties overall.

“I think in the second half we played much better, how we should play,” Accorsi said. “[Widener] is a good football team. To be able to rebound and come back on the road in double overtime versus a good football team, we can’t complain too much. I was proud at how we stuck together, worked together and how it all came together.”

According to Accorsi, Giles will remain the starting quarterback for Saturday’s game, while there is no definitive first string running back.

“The running back position is a position by demand,” Accorsi said.

Rehm, who racked up 254 return yards to go with his two return scores, was impressed by the team’s overall performance.

“It was a great job by the team, it’s really fun to play a game where you see a lot of kids come together in games like that,” Rehm said. “To start off down, come back, and then fight adversity. It’s fun to watch a team come together and bond over that, to come together and get an overtime win.”

After the week concluded, Rehm was named the New Jersey Athletic Conference (NJAC) Football Special Teams Player of the Week.

The brown and gold are now 6-1 all-time vs. Widener. Rowan is undefeated all-time versus Southern Virginia University, their next opponent.

After this season, SVU will depart the NJAC and join the NCAA Division III Old Dominion Athletic Conference. SVU is 0-1 so far this season, having lost 38-9 last Saturday night at Christopher Newport. This will be the first game inside the conference for both teams this year. 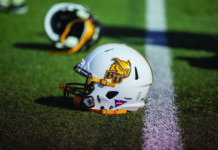 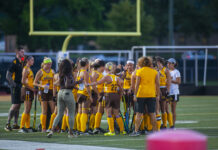 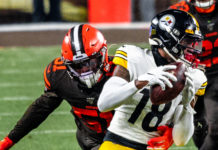