Much like a relay, Rowan’s season has been broken up into four defining “splits.”

The first split got out to a decent start, taking second at the WPI Gompei Invitational.

The third split didn’t go as well, with a third place finish at the Metropolitan Conference Championships (METS) that hurt but didn’t leave the relay in a position that takes them out of competitions since five men qualified for the National Collegiate Athletic Association Division III Championships (NCAAs).

Now the fourth split. The anchor. The Profs are in a position in their season-long relay where the win is within grasp, but they’ll need a legendary finish at NCAAs.

Head coach Brad Bowser is going into it with high expectations for his squad.

“If we can come away with a couple top-eight swims and a couple top-16 swims I think it’s a successful meet,” Bowser said.

Each finish also gets points for the team, which contributes to the team’s overall score and position. Bowser sees a top-15 finish for the Profs and sophomore Kevin Gillooly is even eyeing a top-10 finish.

The five men that will be representing the Brown and Gold in Greensboro, North Carolina are Gillooly in the 50 freestyle, 100 freestyle and 100 backstroke; Kevin Yanagisawa in the mile; and Matt Grubb in the 100 breaststroke and the 200 medley relay. The medley is made up of Dan Lawton (back), Grubb (breast), Jake Kayati (butterfly) and Gillooly (free).

This is Gillooly’s second trip to NCAAs, but this year is different to him.

“Last year I came to this meet and I didn’t really have a lot of confidence in myself,” Gillooly said. “I didn’t even have confidence that I was even supposed to be at the meet because I didn’t get invited…We only got invited in relays so I wasn’t really sure where I fit in terms of this meet. But this year coming [in seeded] fourth in the 50 [free] I’ve been trying to keep myself really confident. I know that I don’t just deserve to go this year but I deserve to win heats and win a national title.”

He clearly has huge plans for himself and hopes to finish top-16 in all his events and even says if everything goes right, there is no reason he can’t crack top-eight in all three.

The relay he’s anchoring should also be a top-three or four relay at the meet in his eyes.

Focusing on the mental aspect of the meet is what he thinks will be the difference this year. He’s going to work on visualizing the races in a calm state of mind so he’s more relaxed for the real thing.

As for the rest of the team, Gillooly said they are mentally loose but physically tight from the hard work they’ve been putting in. They have another week to taper down their practices from the intense workouts they’ve been doing, including resistance and weight training in the water.

“I know we didn’t have the greatest performance at METS but I want to use that to fuel us to be better than the teams that beat us at METS at this national meet,” Gillooly said.

NCAAs will be held in Greensboro, North Carolina from March 20 to the 23. 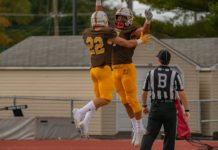