This video notably lacks the sort of clickbait-y title that Felix Kjellberg, also known as PewDiePie, is prone to use to garner views. However, this video has remained highly ranked on the YouTube Trending page for the past 72 hours – a true feat for the flitting affinities of whoever “allegedly” curates the page.

Juxtaposed next to the likes of “Matt Stonie vs. 100 String Cheese” and “10 Tiny DIY Foods You Can ACTUALLY EAT,” PewDiePie’s non-meme review video seems out of place. Kjellberg appears somber and composed in “Ending the Subscribe to Pewdiepie Meme,” appearing against a plain background without the usual accompanying over-the-top edits. This is an appropriate stylistic choice, as the lack of all caps in the title indicates the seriousness of the topic.

In the video, which runs just under four minutes, Kjellberg breaks his silence on the Christchurch mosque shootings which occurred March 15 in Christchurch, New Zealand.

For those who aren’t familiar with the circumstances, PewDiePie’s name appeared in the news in connection with this tragedy as a result of the shooter, who killed 50 people, live streaming 12 hours before the shooting saying to “subscribe to PewDiePie.” This is in reference to the tremendously popular “Subscribe to PewDiePie” meme that has swept all corners of the internet.

The “Subscribe to PewDiePie” meme began as a sort of call to arms of PewDiePie’s fanbase, the “9-year-old army,” to rally subscribers for the channel as it was challenged by T-Series, the now most (technically second) subscribed channel on the platform. The meme transcended the limits of the digital world thanks largely in part to other creators and fans.

Mr. Beast, another massively popular YouTuber, along with friends represented the meme at the Super Bowl. Before this, hackers managed to get random printers to print the meme; the antics propelling the meme since its conception in August 2018 were seemingly endless… but not always harmless. While the immense tragedy that is the Christchurch shooting goes far beyond any antic, the fact that it is linked to this meme is noteworthy.

At first, Kjellberg refrained from comment on this link. The media at large, on the other hand, did not. Questions of the corruptive intents of PewDiePie rose, harkening back to the PewDiePie – Wall Street Journal debacle of 2017. However, in the “Ending the Subscribe to Pewdiepie Meme” video, Kjellberg responds in a very different manner than he had after the media frenzy of a few years ago. Instead of talking about the bad press or his own interests, Kjellberg calmly calls for the “Subscribe to PewDiePie” meme to end. He acknowledges the support and positivity he once felt at the beginning of the meme’s popularity but believes that some of that positivity has been tainted over the course of the past years, especially in light of the Christchurch shooting. To respect the families and victims, Kjellberg says the meme must end.

But can you end a meme?

But can you move from embracing a meme to ending it, essentially disowning it?

The most liked comments on PewDiePie’s most recent video seem to validate the fact that the “Subscribe to PewDiePie” meme is over, but whether or not the internet will let go of it is still up in the air.

A question of mine is will this slogan be adopted “by the dark side”; in other words, after its use in connection with the Christchurch shooting, will extremists adopt the meme? Given its popularity already, an extremist adoption of the “Subscribe to PewDiePie” meme could be malicious – it could have the potential of capitalizing on the massive popularity of PewDiePie himself, who has nearly 100 million people subscribed to him.

Regardless of what happens to the future of the meme, it was a smart move for Kjellberg to post “Ending the Subscribe to Pewdiepie Meme.” For the 9-year-old army, it’s time to move on. 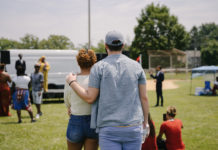