There was a full audience for The National Dog Show Therapy Dog Symposium in the Eynon Ballroom on Nov. 19.

Roughly 70 dog-lovers attended the event to learn more about therapy dogs and share their knowledge and experience. The event was run by Michele Pich, the assistant director of The Shreiber Family Pet Therapy Program at Rowan.

Gerald Shreiber, the donor who made the pet therapy program possible, was the first to share about his love for animals. He told the story about his past and how entwined it was with animals. Shreiber touched on how animals make people feel and how it plays a role in pet therapy.

“Pet therapy can be an invaluable benefit to the students and to the school and to the animal. It makes the person feel safer, warmer, happier,” he said.

David Frei, co-host of The National Dog Show on NBC and founder of therapy dog nonprofit Angel on a Leash, gave a keynote speech which detailed his experience going to hospitals and schools with his therapy dogs.

Frei was at The National Dog Show on a Saturday when he got a call from home that his cavalier, Angel, had to go to an emergency vet. He left his hotel 3 a.m. Sunday, flew out at 7 a.m., arrived in Portland, Oregon at 11 a.m., drove two hours to his home to get Angel, drove two hours to the emergency vet and spent five hours with there. Angel is now doing much better.

“Angel is going full speed. She’s still in charge. She’s 12 and a half. Deaf. A little bit arthritic. She’s in charge of the home and she’s fine,” he said.

During Frei’s keynote speech, which featured many stories and pictures, he talked about the time him and his dog, Grace, visited a 90-year-old man at the hospital. Hospital staff told Frei the man has dementia and talks in gibberish. As soon as Grace entered the room, the man’s face lit up and he said two words, “more dog.”

Frei touched on how dogs were bred to work, and how a lot of dogs are now working as therapy dogs. He also emphasized the importance of therapy dogs in all aspects of life, ranging from everyday interactions to helping people do their therapy, whether it be physical or otherwise.

Specifically in the Rowan community, people online are upset about the large amount of money being put into the pet therapy program over other mental health resources. However, Pich emphasized the benefits of pet therapy.

“There have been numerous studies out there that show that patients who participated in animal therapy were able to meet goals faster,” Pich said.

Lisa Serad, program coordinator of the Gerald B. Shreiber Pet Therapy Program at The Children’s Hospital of Philadelphia (CHOP), explained the requirements for volunteer dogs and handlers at the CHOP program and that different organizations take different skill sets.

“I usually tell people [that]if you’re interested with volunteering with your dog and have a place in your heart where you want to volunteer, find out which registries they accept first and go down that path,” she said.

Other speakers of the program were Chief of Staff and Liaison to the Board of Trustees of the President’s Executive Cabinet Joanne Connor; Amy Cohen, associate member of Alliance of Therapy Dogs and a disaster and cruelty case responder for American Humane Association and the ASPCA; and Susan Campbell, chief executive officer of the Philadelphia Ronald McDonald House.

There was also a panel discussion that was comprised of many experts in the field, including Cynthia Otto, Jane Kopelman, Steve Kramer, Kristi Leonard and Cherilyn Frei.

Many people who did not have an affiliation with Rowan attended the symposium to see what they could learn from the therapy dog community.

Janae Zechman, a counselor at Shawnee High School, said that their school has begun to introduce therapy dogs and went to the symposium to gather ideas about how to go about that.

“I’ve been having therapy dogs come into our building through a nonprofit. It’s pretty much brand-new for a school to be bringing a dog in and I just want ideas, how you can start the insurance part of it, and how to pick the right dog.”

Peggi Breuninger, who works with the Tri-State K-9 Crisis Response Team, has a 132-pound Great Dane named Alma, which means “soul” in Spanish. They went to Pleasantville after their school shooting to help students, victims and families cope. She attended the symposium to learn more from other therapy dog owners and connect with everyone.

“We’ve just barely scratched the surface at what dogs can do,” Breuninger said. “My dog is starting to alert to women with breast cancer. When we’re doing therapy, I started to realize she’s picking up [smelling] the hormones, and she’s doing the same thing with people with PTSD.”

Breuninger and her team also come to Holly Pointe at Rowan a couple times a month for the therapy program to help students destress.

Alma, 7, has been a therapy dog for six years and a crisis response dog for three years.

“It’s such a privilege to be on the end of that leash,” Breuninger said. 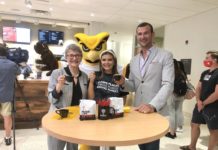 The Student Side: The Destructive Self-Hatred of Cheating