From the moment he first stepped foot on the court, Jonathan Hevalow was always the tallest player.

Taking advantage of his height and impressive leaping ability, youth coaches eagerly sent Hevalow down low to play center. Year after year, the Sicklerville native found himself in the low post, grabbing rebounds and scoring from inside.

There was only one problem with pigeon-holing Hevalow in the center spot: naturally, he’s more of a guard.

“All my life, every team I played on, just because of my height and my athleticism, it was like, ‘oh you can play the center spot,’” Hevalow said. “It was all confidence-based because I knew I could always shoot and dribble and play like a guard.”

Hevalow, a senior and two-time transfer, arrived on campus in the fall of 2018 following stints at St. Andrews University in North Carolina and Rowan College at Gloucester County. Playing sparingly for an experienced Profs team last season, he averaged 2.7 points-per-game and 1.8 rebounds in 7.6 minutes.

“I think like many of our guys who come here and transfer sometimes they don’t know who they are. Other times they think they know who they are, but I always start from scratch,” said Coach Joe Crispin. “People think because he’s 6 foot 5 [inches tall] and can put his head through the rim that he’s a big man. He’s not a big man. We’re gonna play him like a guard and then you watch him enough and you realize this guy’s a really skilled shooter.”

With a greater understanding of his game, Crispin is confident the player known for his athletic dunks can be a bigger contributor offensively.

“He’s a fill in guy. He doesn’t need the ball to be effective,” Crispin said. “He could shoot the three or [if] a big is matched up, he can attack the rim. If you come out on him tight, he’s pretty aggressive getting to the rack.”

Hevalow also struggled to recognize the full-scope of his own talent.  Around mid-year last season, Crispin told the lifelong “big man” to shoot the ball every time he was open, without hesitation.

After transferring to Rowan, Hevalow began to take the craft more seriously. During this past summer, everything clicked.

Through four games this year, he’s averaged 10.3 points-per-game while shooting 60% from the field and 50% from the three point line, including a season-high 15 points against Rutgers-Camden.

“Once you realize that you’re the one that has to fix your problems in order to get on the court, you will become a better player,” Hevalow said. “I told myself I need to change my game. It’s all mental … I’m always in the gym shooting. And I’m still doing it to this day. I’m trying to become a knockdown three-point shooter.”

With the newfound confidence in his jumper, Hevalow is setting out to achieve lofty goals.

“[My goal is to] have the best season I’ve ever had,” Hevalow said. “As a team, it’s to win the [New Jersey Athletic Conference] championship again and try to get to the NCAA [The National Collegiate Athletic Association] tournament.” 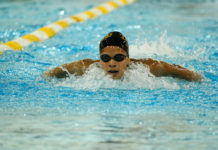