The Men’s Track & Field team is back on top in the region after another successful meet last Saturday at the Oscar Moore Invitational. In their first home meet of the season, three athletes took home NJAC honors of the week.

When speaking about the meet with Beasley, he talked about his overall thoughts on the day.

“I ran pretty well,” Beasley said. “I’m really looking forward to the weather heating up and being more consistent for practices and meets.”

He also went into how he felt about being named NJAC Track Athlete of the Week.

“It feels great and is an honor,” Beasley said. “Especially with everything going on this year and with COVID, for them to recognize the work that not only myself but the team has put in and continues to put in is just really cool.”

When asked what he credits the early succes to, Beasley spoke about the competitiveness at practice.

“The whole team pushes each other at practice. We really try to improve weekly and practice hard like we’re at a meet to prepare ourselves for those close races and for that extra kick for times,” Beasley said. “We make it [as] competitive as possible, so that when it comes to the meets, it is never anything new because we practice being in close races and pushing away from the competition to get some wins.”

When Head Coach Dustin Dimit was asked about Beasley, he praised his leadership abilities.

“Jah’mere has been great since he got here last year. He has the leadership qualities, the work ethic and everything we look for in our athletes,” Dimit said. “He continues to always lead even with everything going on outside of track. In every aspect whether it is academics, athletically or everything in between that he does, he puts his all into it and does a great job.”

Freshman Nana Agyemang once again took home an NJAC honor this week, NJAC Rookie of the Week, after he finished first in the long jump with a distance of 7.06m, which is best in the conference and sixth in the NCAA Division III.

Junior Dan McAleavey also received NJAC honors, being named NJAC Field Athlete of the Week, after taking first in the javelin with a throw with a distance of 60.81m, which marks the second week in a row he has posted the top throw in NCAA Division III.

Dimit was asked about the team sweeping NJAC honors for the week.

“It is great to see the team get recognition from the conference and hopefully they can continue their successful starts through the season and into May for the big goals,” Dimit said.

Dimit added that it is great to see the team just compete at all. He also went into what led to the successful start.

“Practice throughout the fall and winter has definitely helped,” Dimit said. “The goal at the beginning of the season was to control what we could control and if we get the chance to compete we’ll be ready, but if not, we’ll enjoy being with each other and enjoying the camaraderie. It’s great to win things, but part of it is being part of that family and being together. The guys have embraced that too and that makes us a better team.”

The team is currently ranked fifth nationally and first in the region. They compete again this Saturday at West Chester University for the Bill Butler Invitational. 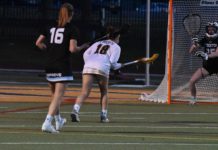