I would like to start by thanking Daniel Tepper for sharing his views with The Whit to be published this past Friday. The Whit is made better by students from a diverse set of ideologies and perspectives who write to express themselves and their thoughts. That being said, I feel that I have to, for the sake of good conscience, respond to last week’s opinion piece by Tepper with one of my own.

In paragraph seven of Tepper’s article, he references a statistic in the FBI archives, claiming that “Blacks account for…51% of murders.” However, Tepper neglected to mention that this statistic and all other statistics in that table referred only to “offenses charged,” and not offenses that those accused could be accurately proven guilty and convicted of. So the more accurate interpretation would be that Blacks are accused of 51% of all murders in the United States.

While Tepper argues that “the strongest predictor of being shot by the police isn’t a person’s race, but whether a person is engaging in violent criminal behavior,” further study can inform us that this, too, is misleading.

Firstly, it warrants clarification that the source Tepper is referencing there, a study by Joseph Cesario (Michigan State University) and David Johnson (University of Maryland), which was hyperlinked in a Daily Caller article written by a former West Virginia police chief that Tepper also cited, was actually retracted by its authors due to a “misinterpretation of the findings that resulted from language used in the paper.”

The following is a part of a statement issued by the original authors concerning this study: “We were careless when describing the inferences that could be made from our data. This led to the misuse of our article to support the position that the probability of being shot by police did not differ between Black and white Americans. To be clear, our work does not speak to this issue and should not be used to support such statements.”

Tepper’s argument, by its very nature, implies that within every police confrontation with someone who is alleged to have engaged in violent criminal behavior, they are actually guilty, and that racial disparities don’t exist in convictions, police stops or arrests. Tepper argues that “crime is closely tied to poverty, and it is true that Blacks are more likely to be poor.” He further argues that “police do not regularly interact with members of the population who are not engaging in crimes,” leading Tepper to the conclusion laid out in paragraph eight that supposedly Black crime rates, not systemic racism, are to blame for the increase in police killings of Black citizens.

Setting aside the moral crisis in suggesting that Black communities are responsible for the racial disparities and violence inflicted on them, it begs affirmation that reality also simply does not reflect that argument.

First of all, as Tepper himself rightly points out, Black citizens in America account for 12.3% of the total population, and are killed by police at a rate that is disproportionate to their representation in the overall population. Secondly, racial disparities in the treatment of Black citizens by police and the justice system do not only exist but also extend beyond people who actually engage in criminal behavior.

A study by the University of Michigan’s National Registry of Exonerations found that Black Americans who are convicted of murder are approximately 50% more likely to have been wrongfully convicted than non-Black Americans. Despite making up only 12.3% of the American population, Black exonerees constitute 47% of the list of 1,900 people as of October 2016, the study explains.

In addition to its findings on wrongful convictions, the University of Michigan study also found that murder convictions that led to exonerations with Black defendants were 22% more likely to include misconduct on the part of police officers than those with white defendants.

In 2020, a team of law scholars from Boston University analyzed data from over 3,933 police killings. They found that Black suspects are twice as likely to be killed than suspects of other racial and/or ethnic groups, even when there are no obvious circumstances that would justify the use of lethal force.

At this point, the disparity in justice for Black and white Americans appears painfully clear. But I would implore all readers to consider the real people whose lives are decimated, even taken away, by these sobering patterns.

Sadly, there are enough names out there to fill an entire dissertation and still not get to them all, but let’s start here: The Central Park 5 were teenagers when they were wrongfully imprisoned for a rape they never committed, a case in which former President Donald Trump went on record falsely proclaiming their guilt and calling for the adoption of the death penalty in New York, an opinion he himself said was inspired by this false allegation.

“Race is not a predictor of crime,” Tepper writes. And I would argue that he is right about that. However, race is clearly a predictor of wrongful conviction, wrongful arrest and police misconduct and brutality. And there is so much that isn’t OK with that.

Still, there is more to unpack here than a simple exchanging of statistics. Tepper makes arguments that, despite his best efforts (and maybe inadvertently), perpetuate dangerous and offensive racial stereotypes, such as the idea that the “lack of a father” is a relevant factoid. It isn’t. It’s a stereotype, plain and simple, one that is still weaponized to demean Blacks.

I also felt compelled to address Tepper’s analogy, that “if one of… two people grew up going to church with their dad every week… we will believe it is more likely for the second person to be a criminal,” due to the Christocentric values it purports.

I mean, here I am, proudly Jewish. I never went to Sunday Mass and I like to think I turned out fine. So can anyone else, church or no church. It is wrong to impose Christocentric ideals of moral supremacy on people who may not believe in your religion, or who may not believe in any religion. It’s OK to not be Christian, and it’s also OK to not practice religion at all.

With all due respect to Tepper, who has, in fairness, expressed his support for the full legal process behind the conviction of Derek Chauvin, I write this with the hope of providing a more nuanced and accurate understanding of what are very real and important issues in this country.

I also write this in service of the idea that mutually beneficial and civil debate and discourse can be achieved in the public and private sphere. While Tepper and I may publicly disagree on these issues, I continue to believe that we can do so without diminishing our respect for one another. And so can everyone.

For comments/questions about this story, email the.whit.rowan@gmail.com or tweet @TheWhitOnline. 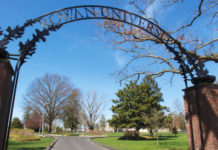 McGraw: From Classes to Clubs to the Honors College, A Reflection of My Year at Rowan as a Transfer Student