“We tell people sometimes: We’re like drug dealers, come into town and get everybody absolutely addicted to painting,” Bob said. “It doesn’t take much to get you addicted.”

Bob Ross, most known for his long-standing television show, “The Joy of Painting,” is perhaps the most famous modern artist with an emphasis on landscapes. His smooth voice, love of nature and afro hairstyle allowed him to stand out from other artists.

His show ran for over thirty seasons, spanning over 11 years. It also allowed him to create a network of “Bob Ross certified” painters who conducted art lessons nation-wide.

Ross believed that within every single person is an artist waiting to be let out. He believed everyone could paint, even going so far to do an episode using only gray-scale colors after a fan told him he couldn’t paint because he was color blind.

Ross was known for this kindness and joyful energy. In the documentary, his son, Robert ‘Steve’ Ross, informs viewers that, “the Bob you see on TV is pretty darn close to his real attitude, about nature and about everything, really.” This consistency in his character tricked many people into thinking they knew all about the brilliant artist.

The truth is even die-hard Bob Ross fans knew little about his life behind the camera. The documentary covers those known facts about Ross’s life. While the artist was very visible and vibrant throughout his over 400 episodes, he was also quiet about his personal and business life; a story his son says “[he’s] been wanting to get… out for all these years.”

He often talked about how proud he was of his son, Steve. He introduced him as “the pride and joy of [his] life” when he occasionally had him on the show as a guest painter. Bob never wasted an opportunity to tell the audience about his son’s skills, yet was utterly silent about their fraying relationship which ultimately led to the Steve and Bob (via The Joy of Painting on PBS) pair not speaking for several years. 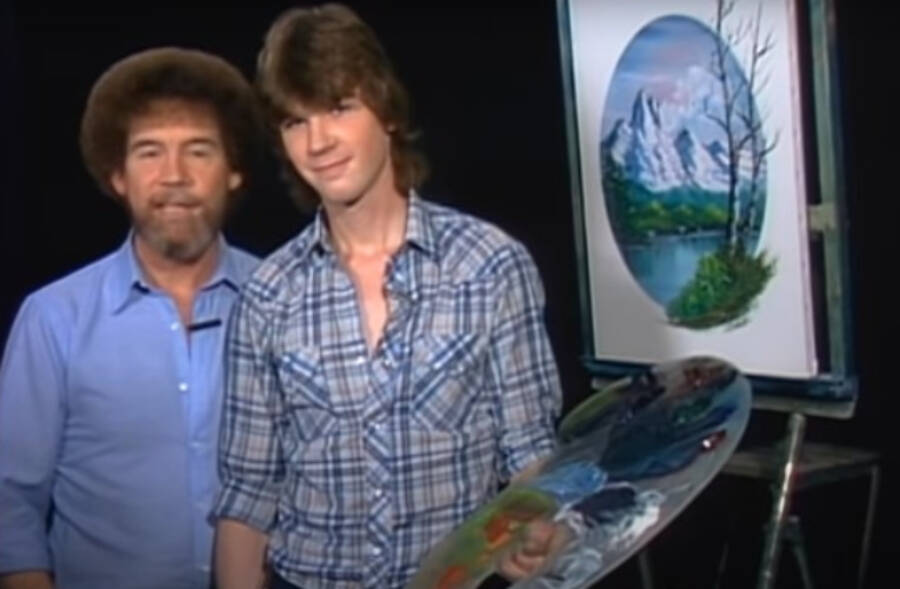 Bob Ross and his son, Steve, on filming “The Joy of Painting.” / Photo via thesun.co.uk

Steve loved to paint, but had no interest in following his father’s celebrity path. Bob, on the other hand, admitted that he hadn’t painted as well as he could have in order to make it easier for his son to take his place. This caused a “power struggle” according to Steve and caused the break up between the duo.

Bob Ross’s alleged affair with his business partner Annette Kowalski added to the tension. Within the film, Steve recalls finding his father and step-mother, Jane, arguing one early Christmas morning before his father admitted to having relations with Annette. This allegation is also backed by numerous accounts from people who worked with Bob and Annette recounting that the pair had a close relationship and would sometimes come out of the same hotel room. Despite this, the filmmakers note that the Kowalskis denied there ever was an affair.

Unlike most documentaries, the story doesn’t end on July 4, 1995 when Bob Ross passed away. This documentary takes a close look at the remnants of his legacy.

It discusses how Walt and Annette Kowalski still own the rights to Bob Ross’s name, how his son fought and lost legal rights to his own name and how Bob tried to avoid all of this within his final days while slowly dying from non-Hodgkin’s lymphoma.

In the last few months of Bob’s life, the Kowalskis attempted to get Bob to sign away his rights. In an effort to stop this from happening, he hastily married a nurse he had only known a few months, and signed his rights away to his son and his step-brother, Jimmie Cox.

Upon his death, the Kowalskis sued the widow and Jimmie for physical possessions such as paintings, his palette and tapes containing their phone conversations with Bob. As 51% majority owner of Bob’s rights, Jimmie signed away those rights to the Kowalskis to make the lawsuit vanish. Despite this also meaning Steve losing rights to his father’s name, Jimmie never informed him of this deal.

The documentary has inspired and angered many people who finished watching, feeling outraged that Steve had lost his legal battle and continues to receive zero percent of profits from Bob Ross, Inc.. This reaction, combined with the possibility of Steve filing an appeal, has caused the creation of GoFundMe campaigns to build up funds to cover legal costs. One such fundraiser is being hosted by Richard Driese, an ordinary blogger and Bob Ross fan. Currently 350 people have donated more than $10,000.

“Bob Ross: Happy Accidents, Betrayal & Greed,” found exclusively on Netflix, discusses all that and more through one and a half hours of interviews, clips from “The Joy of Painting,” and never before seen photos and video footage.