The Rowan University field hockey team is back in action again after not playing in almost two years in what is an exciting time for all of Rowan athletics.

After a cancelled 2020 fall season due to the COVID-19 pandemic, the Profs field hockey team returned to the field last Thursday where they won 7-4 against Ursinus College. It was their first game since November 2019.

Head Coach Michelle Andre realizes there is a hunger in her team to get back to playing games, but she says they have always had that fire in previous seasons not impacted by the pandemic.

“I think every team in the country is more motivated,” Andre said they have an understanding to avoid taking life for granted. “But the team was motivated prior to the pandemic about what they wanted to accomplish… COVID has added that extra layer of, ‘Let’s do this now.’”

Some players’ eligibility was extended into this season due to the pandemic, including captain and midfielder Kristiina Castagnola, who is also continuing her studies at Rowan as a graduate student. For Castagnola, there was an uncertainty about if they would play or not due to the increasing severity of the pandemic.

“I feel like it was more difficult than people think just because, yes, we’ve been anticipating this, we had so many practices and have been working towards it,” Castagnola said. “But you never know how it’s gonna go until you actually play.”

Any worries have been squashed with the season starting officially last week. With two games done, the Profs have yet to be defeated, and Andre and the team are looking to stay competitive in the New Jersey Athletic Conference [NJAC] in which four other teams are also 2-0.

“It’s always a tough division,” Andre said. “When we start playing, [in the] regular season and in the division, anything can happen. I anticipate it will be as it always is, tough competition. But that’s why teams from the NJAC always fare well in the NCAA tournament.”

Castagnola shares the same sentiments, but is confident her team is able to combat anything in their way.

The first NJAC matchup is still a few weeks away, so the team is focused on keeping their sights on the next game Saturday against Johns Hopkins University. This week is full of practices, watching film, and scrimmages.

“Our whole thing is basically to stay in the moment,” Andre said. “They know [NJAC games] are something to look forward to, but they can’t have that without this weekend.” 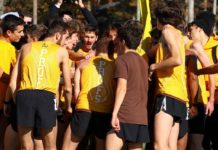