The Rowan University field hockey team went into Wednesday night expecting to hit the field in their game day uniforms, but found themselves in their practice pinnies instead after their matchup against Stevens Institute of Technology was postponed.

The Profs were looking to bounce back after their loss to Johns Hopkins University on Saturday, but about two and a half hours before the first whistle, the team that the game would need to be pushed to a later date. While the full situation is still unclear, captain and back Dayna DeVincentz said that it was a matter of precaution.

This is the first time in Rowan’s 2021 field hockey season that a game has been postponed due to a non-weather related issue.

The chance of postponement has been on the back of the minds of DeVincentz and her teammates.

“Coming into the season, we always knew there was a possibility of this happening,” DeVincentz said. “So we just have to prepare ourselves for the rest of the season in case this happens again with another team… and just be ready.”

However, DeVincentz does not see the postponement as a setback. The freed up time was used as a chance to improve.

“We sure would have loved to be on the field tonight, but we made the best out of it,” DeVincentz said. “We were able to honestly play more and scrimmage more and get our positioning down and try new things and try new people in new places and kind of just experiment more with the time that we didn’t know we were going to have. So we turned what was bad at first into a good opportunity and a very, very good practice and a helpful practice.”

The postponement of Wednesday’s game means that for now, a home game is lost. This could be something detrimental – especially as the team embarks on a stretch of four away games in a row – but DeVincentz is not worried.

“Getting this home game taken away from us I think is going to just help us to prepare more for the away game,” DeVincentz said. “We love playing at home, but now we need to bring that intensity to Haverford to the other away games that are coming up.”

For now, there is no set rescheduled date. In the meantime, the Profs will be looking ahead to their next match up Saturday, Sept. 18 against Haverford College. 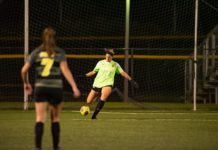 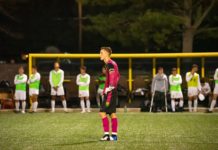