Rowan students, staff, and faculties’ cellphones buzzed with a daunting alert on the first day of school—“TORNADO WARNING.”

At about 6:12 p.m. on Sept. 1, Gloucester County and surrounding areas received a tornado warning issued by the National Weather Service, telling people to move indoors, to stay away from windows and avoid traveling.

Soon after the alert sounded, the tornado touched down in Mullica Hill, Woodbury Heights, Deptford and West Deptford, destroying homes, farmland, and anything else in its path.

According to Nick Pittman, a.k.a. ‘Nor’easter Nick,’ a trusted weatherman in South Jersey, the devastating tornado was a confirmed EF-3, with winds of 150 mph.

There were a total of 92,651 power outages statewide after the storm, according to Peter Peretzman of The New Jersey Board of Public Utilities. As of September 7, there were 788 power outages across the state.

“I have seen a lot of destruction, and what mother nature can do, but I think this one takes the cake,” Pittman said.

Pittman has been forecasting the weather for 11 years, and primarily reports for South Jersey. During the tornado, Pittman was sitting at his own self-made studio within his home, keeping the public informed on the next turn the twister may take. At one point, the tornado was about four miles from his home in Sewell.

“Yes safety is important for myself, but the safety of thousands of other people that were watching, at that moment, was more important to me,” Pittman said, explaining why he didn’t retreat to his basement during the tornado.

Although the severe weather damaged many homes, citizens did their best to remain safe.

According to Assemblyman William Spearman, there were zero fatalities in South Jersey.

“One house which we were in front of had a pregnant woman, two daughters and a father, and it’s really a blessing that they made it out without any injuries,” Spearman said.

Spearman also noted that Governor Murphy has already been contacted by President Biden about the recent weather emergency.

“I know that the Governor had been in contact with the President. The Governor actually got a call from the President in the middle of our press conference the other day,” Spearman said.

Although this tornado is considered historic, Gloucester County and Camden County are both considered ‘tornado alleys’ of South Jersey, according to Pittman.

When Pittman saw that there was a significant threat of a tornado headed for South Jersey, he went straight to his Facebook page, to alert his audience of about 78,000.

“You know social media is a gift, I can go on there and talk to thousands of people instantly and get that message out there, so we are making strides to become a weather-ready nation, but more locally, I think people need to be more aware,” Pittman said. 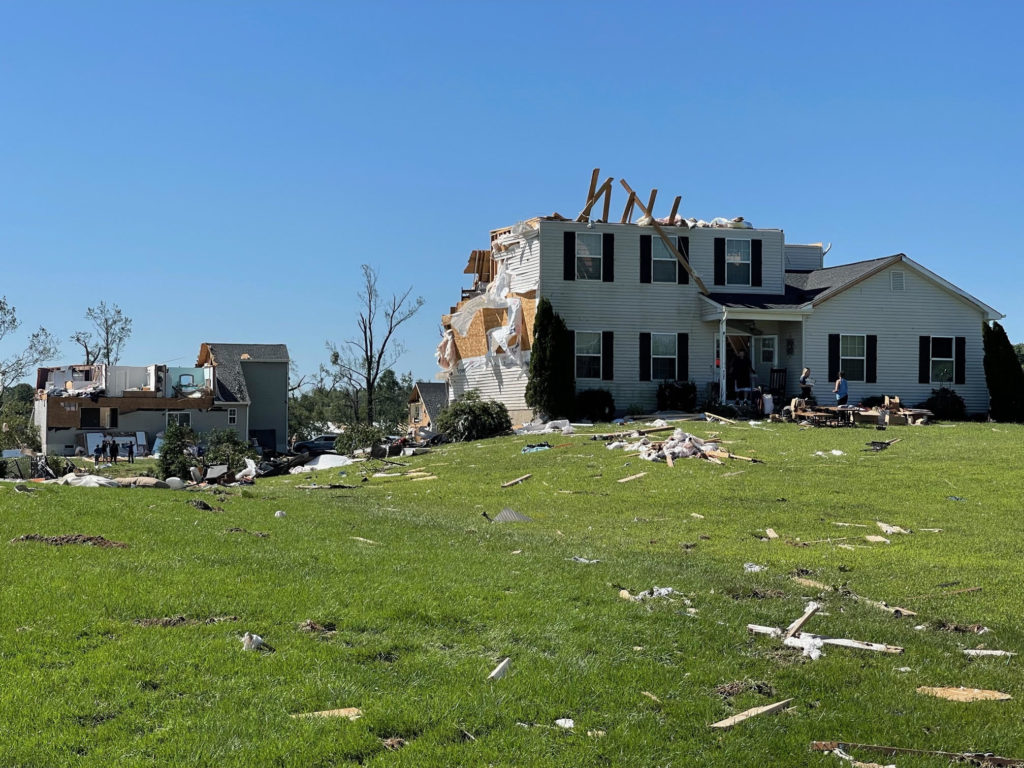 Roof missing from a home in Mullica Hill after the tornado. -Photo via Nick Pittman

The tornado didn’t touch down at Rowan University, but the college still took precautions to make sure everyone was safe, especially with having a large commuter population. Classes were cancelled or went remote during the weather emergency.

Brian Gold, 23, a theater major with a concentration in acting, was in class at Bunce Hall when the Rowan Alert email chimed.

“Everyone’s phones started sounding the alarm at once, loudly, when we got the warning, and then we evacuated,” Gold said. According to Gold, the students went into the basement of Bunce Hall and stood against the lockers until it was safe to leave.

Once the threat was over, Gold began to drive back home, but the after-effects of the tornado made it difficult.

“There were power lines down, a lot of debris in the road, mostly trees knocked down to the side and leaves and branches all in the road,” Gold said. “I passed the neighborhood in Mullica Hill that was hit hard, I saw a lot of damage and even roofs were ripped off the top. I had to take many alternative routes to get home, and luckily I got there safely after an hour of driving.”

Although Rowan’s campus didn’t receive physical damage from Hurricane Ida, our thoughts are with the students and families of New Jersey who have been affected.

‘Nor’easter Nick’ Pittman has created a website to donate and help those in need. To learn more, please visit noreasternick.com/relief.

On the Brink: Ukraine and Russia