Tonight, the Delaware Blue Coats will be stepping onto the court in Chase Fieldhouse for the first time in almost two years as they face the Long Island Nets in their 2021-22 season opener.

Coming off a NBA G League season where they played only 15 regular season games and kept the teams in a “bubble”, due to the COVID-19 pandemic, this season will be one where the league returns to normalcy. The teams are playing on their home courts once again and are back up to a full 50 game schedule.

Returning to a normal, full length season after playing such a drastically different type of season is something that will take some getting used to, something that one of the two returning Blue Coats, Jared Brownridge, realizes.

“It’s a lot mentally just because we played in the bubble last year, it was a shorter season, just to kind of prepare your mind for a normal season used to be,” Brownridge said. “I think that started in the offseason, we just have to trigger our mind to say ‘ok, we’re going back into full on season’. We’re going to be traveling, going to be playing in front of fans, so you just have to gear yourself up that way mentally, that’s the only way you can do it.”

As Brownridge pointed out, the team will be playing in front of fans for the first time since before the bubble season, definitely one of the positives of leaving that format. And with what the atmosphere of the Fieldhouse has the potential to be for their season opener, it has new Blue Coats players like Shamorie Ponds excited.

“They said it is going to be sold out, so definitely expecting a lot of excitement,” Ponds said. “It’s the first game with fans back, so I’m looking forward to it.”

After playing a season with no fans, no matter the amount of people in the Fieldhouse, Brownridge knows that the energy will be better than last season.

“You’re going to feed off energy whether it’s two people in the crowd you know what I mean, just because there was nobody in the crowd last time,” Brownridge said. “We still want to bring our own energy as a team but now we know that we’ll have the support of our fans at our home games that can provide that extra energy for us. And as players we know how it feels when you make a shot, just to feel the energy and the electricity in the building go crazy when you hit a shot, it makes you want to play even harder. So we’re looking forward to having it.”

When it comes to the actual game tonight, the goal for the Blue Coat’s Tra-Deon Hollins and the rest of the team is a simple one that they will have every game.

“Win,” Hollins said. “We have all been coming together, playing hard, but we all want one thing and that would be it.”

The Blue Coats season opener will take place at 7:00 p.m. tonight in front of what is expected to be a sold-out crowd for their first game in the building in almost two years. 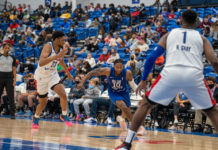