In a back-and-forth affair, Rowan men’s basketball picked up their first home win of the 2021-2022 campaign on Wednesday night. The Profs earned the victory over Marymount University 119-108.

In their first game back in the Esby Gym in nearly two years, the team had the crowd roaring from start to finish. It wasn’t until late in the second half though that the Profs were able to pull away as the game was mostly competitive with both teams hitting big shots throughout the night.

For the Profs, seven of the 11 guys that saw game action were able to land in the double digits for scoring. One of those players, senior guard Arian Azemi, was able to contribute 41 total points for the squad.

Azemi was electric throughout the entire night, but it was at the start of his night when he was really on fire. 33 of his total points came during the first half of play, as he connected on nine three-point shots on 11 attempts.

With his shooting performance tonight, Azemi was able to cement himself in Rowan Athletics history; he tied Nick DePersia (2019) for the most three-pointers made in a single game, nine.

“I knew about the record before the season,” Azemi said. “I had a goal to beat it during the playoffs. I didn’t even know I tied it in the first half, I found out after the game.”

With the season still young, Azemi will have plenty more attempts to break the record. However, the ultimate goal of getting a team win was accomplished on Wednesday night, and Head Coach Joe CrispIn could not be any more pleased with the victory.

“It was fun and that’s what it’s about,” Coach Crispin said. “That show we put on in the first half, I mean, you’re not going to see much of that. It was incredible.”

While the Profs have raced out to a 3-0 start on the season, the coaching staff is still going to be looking for areas that the team can improve in. Even in the victory, Crispen wants to see his team grow and not remain content.

“We want to learn and win,” Coach Crispin said. “That’s our goal. I am going to operate like we lost the game so we can learn as much as possible that way. We thought we could have scored even more.”

Rowan is going to have quite a bit of time to work on some of the things that they want to improve on, as their next game is not until Nov. 23 at TCNJ.

While the Profs seemed to feed off of the crowd’s energy in the win tonight, they are also going to have to wait until December to play in front of the Glassboro again. Their next home game will be against their New Jersey Athletic Conference (NJAC) rival Stockton on Dec. 1.

Will Rowan be able to keep their momentum going after defeating Marymount to advance to 3-0, or will the away-game hiatus stand in their way? 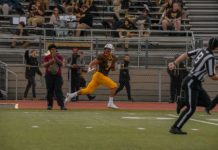