Emperor of Fun Dave Raymond spoke to students about mascots, branding and the Philly Phanatic during the semester finale of Pizza with the Pros.

Raymond joined Rowan students at Bozorth Hall to discuss his unique path from college football punter to mascot creation professional. Perhaps Raymond’s breakthrough performance was his place in the 1978 unveiling of the Phillie Phanatic– inside the bulky costume.

Elaborating on the path to his mascot debut, Raymond expressed appreciation toward his father, referencing how the connections were already there for him to make. Raymond’s father delivered wise words about doing exactly what is asked of you following the notice of a Phillies internship opportunity.

Despite wearing a mascot suit for three hours, Raymond summed up how progressing through the ranks of the Phillies organization took more than just being a fun Phanatic.

“[Be] just as good a person outside the costume as you are in the costume,” Raymond said.

His Phanatic tale did not end there. Not only did Raymond find his dream job in costume, he found the love of his life in costume as well. In an attempt to gain public appeal for opening day, the Phanatic was set to make an appearance guarding a downtown storefront displaying the Phillies’ newest jerseys. After jokingly chasing his future-wife’s friend away in the large green outfit, Raymond knelt down and greeted his to-be bride with a kiss on the hand. Love at first sight has a whole new meaning when looking into softball-sized eyes. They have been together since.

As much as Raymond was a jack-of-all trades inside the suit, outside of it, he became a mogul in the “character branding” industry. Raymond has grown a career of creating and organizing character branding. There’s a difference between marketing a mascot compared to a player or team.

To digress, the mascot is a long term and reliable weapon for organizations to use when attendance or revenue is low. In reference to a player, there are less variables weighing into a mascot’s availability for media or public appearances. Due to their extensive availability and appeal, they should attempt to be the most fun-inspiring figure they can, as they are a physical representation of the organization. Thus, the Emperor of Fun acquires his namesake.

In his time running Raymond Entertainment, the Emperor of Fun has consulted with over 130 characters spanning from all sports, professional and minor leagues. The most notable of Raymond’s creations happens to live in Philadelphia, and is known for his googly-eyes and bright orange mane.

Understanding that the aura surrounding the Philadelphia Flyers was dull in 2018, management knew a mascot would be a timely addition. They went to Raymond to aid in the creation of Gritty. He recalls the metaphorical round table of all the stakeholders involved with the decisions.

“‘Everyone is gonna hate it,’” Raymound remembers an executive saying, “for six months.”

Lucky for them, it only took a matter of weeks for Philadelphia fans to fall for the troll-looking mascot. Raymond noted the Flyers historically unkempt look helped Gritty’s design choices “make sense” and would eventually lead to the acceptance of Philly fans.

Raymond mentioned how Gritty strayed from mascot normalcy, using social media and branding to their benefit. Unlike the family-friendly nature of most mascots, Gritty brought a sense of defiance and sarcasm to the scene of an otherwise one-dimensional industry. Understanding the importance of memes, late night talk show appearances and all around hysterical performing is what led to the success of the Flyers mascot and furthered the success of Raymond’s career. He founded the mascot Hall of Fame in 2005.

When Raymond is not busy being the Emperor of Fun, he does keynote speeches around the country on the Power of Fun.

“The Power of Fun is the secret to overcoming the countries’ most pressing issues,” Raymond said.

Students in attendance experienced a two-minute thought experiment with Raymond, helping them to begin to understand this power and how he had changed his perspective on life.

Dave Raymond marked the last guest of the fall semester’s Pizza with the Pros. It will return during the first week of February 2022. 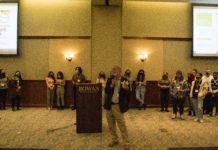