The long-awaited homecoming of Hollybash has finally arrived. This event, co-hosted by the Student University Programmers and Rowan After Hours, was held on April 22 in the Hollybush Green. The event was supposed to take place with the artist T-Pain headlining the entertainment two years ago, but due to the pandemic, Hollybash had been canceled ever since. Many students were excited by its return.

“This [was] my first time ever experiencing Hollybash,” Juleigh VanDyke, a junior, said. “I really wanted to experience it before I graduate and maybe help out with it next year.”

The event, held on the Hollybush Green, provided plenty of entertainment and food for all current Rowan students, both graduate and undergraduate.

Two psychics were available to provide tarot card readings for students, with some students willing to wait over an hour to get their futures told.

“The psychic was very sweet and very insightful,” sophmore Ashley Farley said. “I had never had someone else read my cards before, so I was nervous if it was going to be an accurate reading or not. But it really was. [That was] really good in case people were struggling with a specific topic they needed an answer to.”

“I have permanent tattoos but I think that it’s cool that [henna is] permanent but temporary,” Ambrosia Karall, an undergraduate student at Rowan, said.

In addition, students were able to enjoy a series of amusements such as a mechanical bull, zip-lining and a “Wipeout”-esque obstacle challenge.

“[The event] is really cool. I genuinely enjoy it,” junior Jayla Thomas said. “I love that Rowan does this for us.”

Upon entry, each student was provided with ten tickets to represent $10 in food vouchers they could spend at various food trucks. Some of the food trucks involved this year included The Wing Kitchen, Carolina Blues BBQ, The Water Ice Station, Philadelphia Eats, Famous Sgt. BBQ, and Tacos Al Carbon. These trucks provided a wide variety of options to students such as chicken and waffles, pulled pork, chicken kebabs, and mac and cheese.

Music was also a large part of the festival, with many local artists performing throughout the day leading up to the main slate of performers.

Opening up the main stage was Rowan’s Battle of the Bands winner, Earth on Fire, which consists of vocalist and guitarist Eddie Masterson, bassist Bryce Mirabella, and drummer Ryan DeCesare.

Following Earth on Fire, Yung Joc performed several tracks including his hit songs “It’s Goin’ Down” and “Buy You A Drank.”

Headliner Noah Cyrus’s performance finished off the night with a more grounded and unified feeling. She even performed two unreleased songs including “My Side of The Bed” from her upcoming album, “The Hardest Part.”

At one point in her set, during the song “I Got So High That I Saw Jesus,” Cyrus allowed one fan, Olivia, to join her up on stage. In a heartwarming moment, Olivia took off her sunglasses and put them on Cyrus before the pair began to sway together to the beat of the song.

In another, Cyrus discussed and joked about not having the “traditional” young adult experience, as the 22-year-old musician had never attended college.

“I didn’t get to have this experience that you all do of going to college and living on my own and so in that moment, I got to write a lot of songs and a lot of things about my life and a lot of emotion I got to let out,” Cyrus said, referring to her work on her newest album. “But also whoever wants to take me and the band to a frat party tonight…”

She ended the night with a performance of her hit song “July” followed by “The End of Everything.”

The event was a hit for many, as chatter surrounding it lasted well into the following week. Many are simply grateful they got to experience this event before they finally graduate. For many who are graduating in the spring of 2023 or later, they cannot wait to see what Hollybash 2023 will hold. 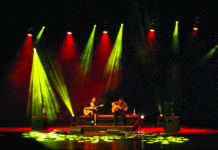