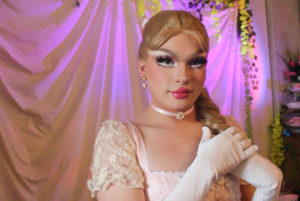 Dakota Dekovitch, 19, has spent the last three years of their life creating costumes and performing under the name Buttercrème at any “Drag Brunch” that would let them. Even after leaving the comfort of their own home in Burlington County, New Jersey, Dekovitch has brought their art with them to Rowan University, where they currently study theater with a concentration in design and tech.

It was their love for theater that formed and nurtured Dekovitch’s passion for drag. In fact, Dekovitch credits their high school’s performance of “Jesus Christ Superstar,” in which Dekovitch played King Herod, as being their first step into the world of drag makeup and theatrics. Theater has only further inspired them from there, seeping into many of the performance aspects of their drag and their “the show must go on” mentality.

Unlike many drag queens who commission outfits and wigs for their performances, Dekovitch’s dorm room has turned into a one-stop shop for costumes, corsets and gender expression. They make every costume from scratch, upcycling curtains, table cloths and other found materials from Goodwill to curate pastel-inspired looks, such as the “Bridgerton” inspired dress they had just recently completed.

“I want to spend time curating this look specifically for me,” Dekovitch said. “No one else in the world owns this. This is my creation… I get to be the art installation.”