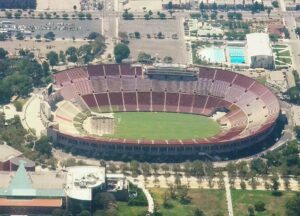 Will the NFL see another sunny day in Los Angeles again? Southern Californians are hoping so.

Later this month, the NFL will receive proposals from teams who want to make the move from their current home to the new one out in California. Afterwards, a vote will take place on the matter between NFL owners during a special meeting Jan. 12-13 in Houston.

The San Diego Chargers, Oakland Raiders and St. Louis Rams have all had their names brought up on the debate of which teams will make the jump. Word is going around that the NFL would allow two teams to share a stadium in Inglewood, California. Much like how the New York Giants-Jets share a stadium in Northern Jersey.

Los Angeles also has the luxury of already having more than one professional team in a particular sport. Aside from the Kings in the NHL, you have the Dodgers/Angels for the MLB and again the Lakers/Clippers for the NBA.

At one point, the Raiders and Rams had the same thing going on in Los Angeles until they both departed in 1994.

So which team or teams should pack their bags and hit the road within the near future? Let’s have a look.

The Raiders would be one of the names that come to mind. The Silver and Black started out in Oakland back in the 60’s, staying there for about two decades before departing to Los Angeles. There, the Raiders would set up shop for a little over a decade and claim their third Super Bowl.

There is some history over there and it would be a nice throwback to things. The Raiders during those years had, for the most part, consistently good teams and enjoyed the years of Marcus Allen, Bo Jackson and head coach/hall of fame offensive lineman Art Shell, who became the first African American head coach of the modern era.

The Raiders would be a nice return for LA, and they have a good core of young players to transition them.

I feel as though this franchise is in need of a reboot.

The Rams are one of those teams year-in and year-out that is either terribly mediocre or hover around a 7-9/6-10 record. In all honesty, they have not been really good since “The Greatest Show on Turf’ team in the late ‘90s/early ‘00s. I’m thinking that a move, a change of scenery would be one of the few things to help remedy this franchise.

The Rams already have a few special players in Todd Gurley, Aaron Donald, Chris Long and Robert Quinn. Imagine those players in the market of LA and doing what they do. It would be electrifying.

The Rams, like the Raiders, have history in the city. They played in Los Angeles for over 45 years and now from the look of things, owner Stan Kroenke is trying to get the team back to its original home. And it’s possible he may get his wish.
You could make the case for a few other teams, such as the San Diego Chargers or even the Jacksonville Jaguars. All of the teams I mentioned may stay put and we may have to spend another day wondering if LA will ever get a gridiron gang.

Maybe expansion could be possible? Who knows what will happen. Only time will tell, but the meeting next month should at least shed some light on the NFL’s situation in Los Angeles.