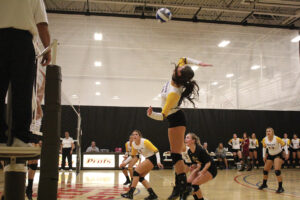 Throughout their turbulent 2015 season, the Rowan volleyball team was very much undefined. While the team had a ton of talent and looked dominant at times, they could never put it all together.

After finishing the year 11-22 overall with a conference record of 5-3, Rowan earned the fifth seed in the New Jersey Athletic Conference Championship Tournament. However, the Profs playoff run would be short-lived as they were swept by Ramapo College in the first round.

Analyzing the brown and gold in 2015 would be analyzing two completely different teams.

There were the Profs that made very few mistakes and wore down their opponents. This was the team that beat three straight conference opponents in early October and was playing their best volleyball of the season.

On the flip side of the coin, there was the inconsistent team which lacked focus, made far too many mistakes and was often outmatched by their opponents. This was the squad that ended their season on an 11-game skid.

Rowan certainly put together stretches where it played outstanding volleyball, but the consistency was never there; every game was a roll of the dice.

“I think our season never really came to fruition the way that we hoped it would,” Jespersen said. “Coming into the season we really had high expectations, but we had a lot of things that got in the way of our goals.”

One of the factors that contributed to the team’s struggles was their less-than-ideal practice schedule.

In the past, Rowan held afternoon practices in Esby gym. This season, however, the team was forced to practice at 5 a.m. in the Rec Center.

“I feel like we were always tired and disorganized,” Jespersen said. “Our days were just so disorganized and difficult, because of morning practices. I think everyone is looking forward to getting back to a normal practice schedule next season.”

While the team as a whole struggled, there were a handful of individuals who stood out this season and were recognized for their performances.

Another player who stood out this season was freshman middle hitter Jamie Shirtz.  Although Shirtz did not receive any conference recognitions, her effort did not go unnoticed by her coach.

As the Profs prepare for next year, Jespersen wants her returning players use this season as motivation as they go through their respective college careers. Rowan is not far off from returning to the level of contender in their conference, and the 2015 season can be used as a valuable learning experience for next year’s team.

“I’m hoping that they learned to be confident and learned how to fight,” Jespersen said. “I’m also hoping that we never put ourselves in the position where we are playing without passion. Really the biggest thing that happened to them this season is that we didn’t play with a desire and we weren’t good leaders. We need to push each other to be better and I hope that we do that next year.”

Members of the volleyball team could not be reached for comment on the season.