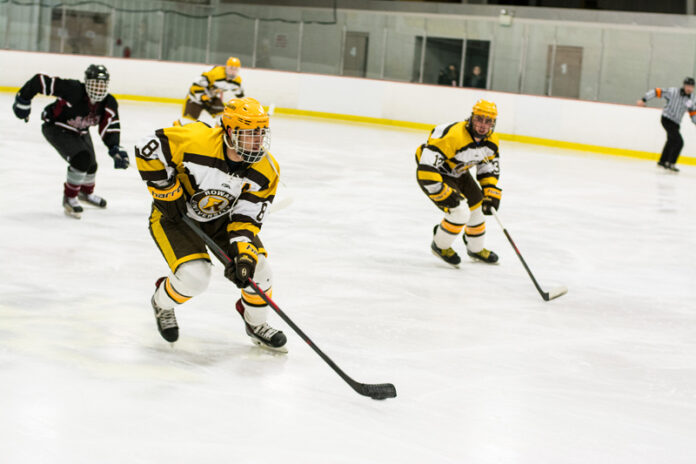 At the beginning of the 2015-16 Rowan men’s ice hockey season, head coach John Caulfield said his team was in “phase 1B” of a rebuilding process.

When teams are under roster rebuilds, they seldom find themselves in the playoffs. But Caulfield had aspirations of the postseason despite heading a roster swing.

He has now reached his target as Rowan has secured the second seed in the Mid-Atlantic Collegiate Hockey North playoffs.

“It was our goal [to make the playoffs]. We felt we had enough pieces to compete for one of the four spots,” Caulfield said.

Had Rowan won its last contest against Penn State University on Jan. 15—an overtime loss with one second remaining—the team would have found themselves sitting in the top seed of the MACH North.

Instead, with the defeat, the brown and gold were slotted into the second seed with a matchup against No. 3-seeded rival Rider University.

“We are pretty excited to play Rider. We always have entertaining games,” Caulfield said.

The Profs and the Broncs have seen each other twice this season, and it was Rowan who took home the victory both times.

In the initial meeting, the two squads combined for 28 total penalty minutes, with fouls such as roughing, cross-checking and unsportsmanlike conduct being called.

Caulfield said he has no plans of trying to alter his team’s strategy to surprise Rider, considering the familiarity of the two teams.

“Rider knows our strengths. Our plan is to execute to those strengths and dictate pace,” Caulfield said.

Rowan has only played one game in the past month and for a team that preaches speed and an up-tempo style of play, the rust factor could hinder that style, and bad habits could form for the young team before the playoffs arrive.

Caulfield, however, sees no reason for concern from the layoff.

“We’ve had some good uptempo practices,” Caulfield said. “We tried to simulate game speed as much as we could.”

The team will finally get their game legs back with three tilts this weekend. Even with their regional playoff spot already decided, Caulfield will stress the importance of the remaining five games to his players.

“Right now our focus is to improve our regional ranking. We have some important games with regional implications,” Caulfield said.

Caulfield has guided his rebuild to the playoffs, but will now be tasked with taking his men to the ultimate goal—a deep run that culminates in pictures with hardware.