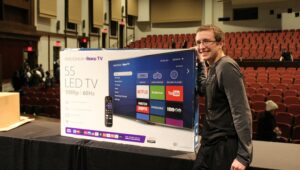 Bingo returned to the Pfleeger Concert Hall this past week, in an attempt not only to fill the hall but to give away as many massive prizes as possible to the hundreds of students in attendance.

The event, organized by the Office of Student Activities [OSA] and Rowan After Hours [RAH], was spearheaded by a social media campaign using the hashtag #FillPfleeger. While having been set at $1,000 originally, RAH coordinators made an effort to fill the hall and raise the pot to $10,000 worth of prizes. However, of the 750 students needed, only 558 were in attendance according to RAH officials, so prizes were instead valued at $6,000.

“We have been doing bingo at Rowan After Hours for at least four years, probably more!” says Emily Koffman, one of OSA’s graduate coordinators. “Setting up $1,000 or $10,000 Bingo is a bit different. I worked closely with the other Graduate Coordinator for Rowan After Hours, Jim Thatcher, and the Assistant Director Megan McHugh. To organize this bingo, we started planning early, beginning with the prizes.”

But more than the prizes, Koffman said she likes to see the motley group the event brings out.

As the night went on, there were plenty of prizes won by a select few of the hundreds of students in attendance. Some of these included multiple gift card bundles for around campus, such as the local Wawa, Shoprite, Ry’s Bagels and many more establishments. As well as those, there were bundles with the PlayStation 4, Xbox One, a 55” inch television and VIP tickets to Hollybash. Hollybash is a new outdoor event being planned for late April on the Hollybush Green featuring games, rides and a concert by the winner of this year’s Battle of the Bands and alternative-rock band American Authors.

Throughout the event, students interacted with each other, comparing cards and making sure their friends didn’t fall behind and miss out on prizes. At one point in the night students were singing along to Queen’s “Bohemian Rhapsody,” showing a unique bond between the students in attendance.

“Bingo was a lot of fun because I got to go with my friends,” says freshman accounting major Shivana Shah.“I went to bingo a couple times last year but I didn’t win so I was really happy when I won this time. I won a Fitbit Surge, so I’m really excited to use it and hopefully it will motivate me to go the gym!”

By the end of the night, prizes were all but handed out, save for the massive HD television. The crowd played until their boards were completely filled out, and as each number was called the students in attendance got louder with anticipation of winning big. The final number hadn’t even left the announcer’s lips before the winner was decided.

Ryan Klohr, a junior business major, sprinted down the aisle the instant N-34 had appeared on the projection screen onstage.

“It was very surreal,” Ryan said, “The round before that, I didn’t get a single number. And then as they kept calling for the full board I had five numbers, then four, then three, then two, then one and I’m seeing that last number and I’m praying ‘If this is gonna happen then just let it happen!” he added, clearly excited about his victory at the end of a very long night.

“I didn’t expect obviously to win, I just wanted to have a good time with my friends, but winning made the night so much better!” he said.