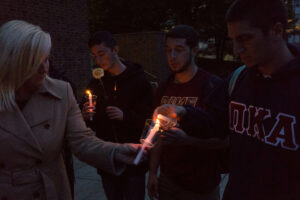 On Wednesday, the Rowan University community gathered on the back patio of the Chamberlain Student Center to pay tribute to members of the student body and alumni who have passed away since 2013.

Each student in attendance was given a small handheld candle and a flower to use during the ceremony.

Family, friends and one professor who knew Lehrer were present at the event, and each made remarks about her life.

After the portion of the ceremony behind the student center was complete, students walked across Route 322 to the university’s 9-11 memorial. There, Bob Zazzali, the Rowan President’s Chief of Staff, made a few brief remarks in place of Ali Houshmand, who was unable to attend the ceremony.

At the memorial, students laid down their flowers  in a heart-shaped ring of candles. Zazzali remarked that while it was sad for Rowan to have to hold this ceremony, seeing the students support one other in this way was heartwarming and inspiring.

After Zazzali’s remarks, the handheld candles were extinguished. For several minutes afterward, several students and faculty members continued to hold hands in a semicircular ring around where the flowers had been laid.

Alexa Morgan, a junior public relations major and a close friend of Lehrer’s felt it was important for her to go and memorialize her.

“I try to remember her in any way that I can, and little things like this, it’s easy to come out and remember her with people and try to let everyone know,” Lehrer said.

“From day one, just trying to find out the names of the kids that had passed away, finding out more information about everything, contacting their parents. It was very emotional experience altogether,” Wohlrab said.

Wohlrab also talked about the most emotional part of setting up the memorial service.

“Just having numbers of the students that actually passed away, and calling their phones, and getting an empty dial tone, I just couldn’t do it, I was shaking,” he said.

Christine Collins, a senior biology major and SGA Executive Vice President, was asked how important it was to hold a memorial ceremony for the student body.

“I think that as Rowan Students, like Zazzali said are a family. The numbers of people who showed up tonight definitely say that we are a family, and that it’s important to come out and support [each other],” Collins said.

At the conclusion of the event, Wohlrab thanked everyone for attending and honoring respectfully the students who have passed.