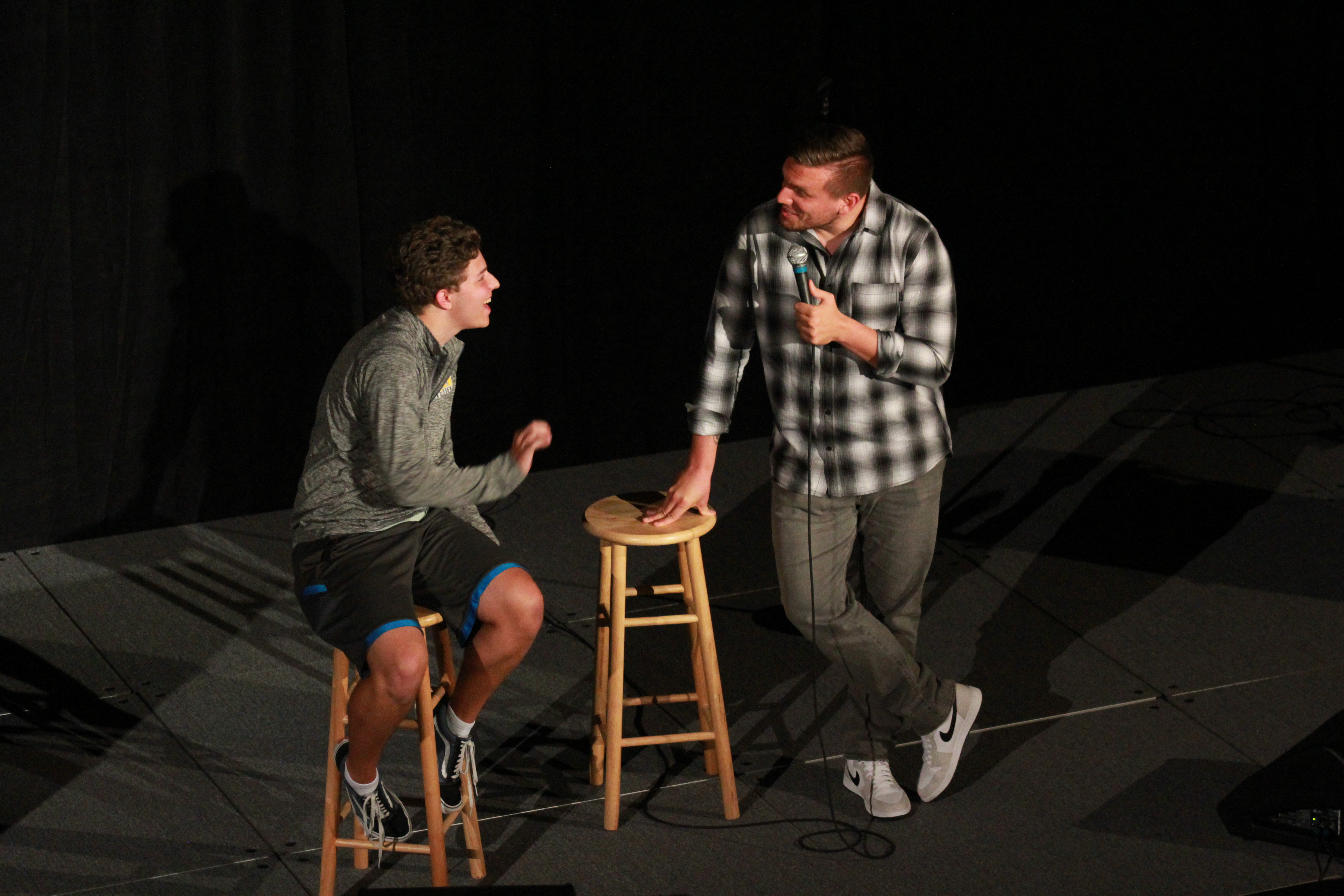 By the time the show began, the Pit was packed with students, including many who were standing along the railing on the sides and on the staircases.

“I thought it was fun,” senior philosophy and religion major Elliot Burmel, who got to meet Distefano after the show, said. “It was nice seeing somebody recognizable, not somebody just starting out.”

Distefano has been performing comedy sets since 2009, but before that obtained a PhD in physical therapy. When he was first performing at open mics and various shows at night throughout New York, during the day he was a physical therapist at a school for children with special needs. Two years later when he booked the show “Guy Code,” he started to be recognized by some of the children’s parents.

“The parents didn’t have a problem with it,” Distefano said, “but the principal of the school told me, ‘You can’t be on a show talking about boners and also be treating little kids. It’s a conflict of interest. You’re going to have to choose.’ Even though I was reluctant to choose comedy at first because I was so attached to the kids, I was pushed into it by the principal.”

Distefano’s debut at Rowan marked the first comedian of the semester at Rowan After Hours (RAH). After seeing Distefano’s work on “Girl Code” and “Guy Code” as well as his appearance on “The Late Show” on CBS, Office of Student Activities Director Constantine Alexakos recommended he be invited to perform at Rowan.

Distefano said his comedy is mostly autobiographical. He discusses personal experiences and his family, including his mom, dad, daughter and girlfriend.

In addition to his prepared content, Distefano drew inspiration from his surroundings and audience members like Trevor Shepard, a freshman chemical engineering major, who informed Distefano during his routine that koalas get high from eating eucalyptus plants. Nicknamed “Koala Kid,” Shepard became integrated into Distefano’s routine, even asking if he could join Distefano onstage near the end.

“Because my parents aren’t here, I feel I can do whatever the heck I want,” Shepard said. “It’s nice to get out there, talk to people, make jokes and whatnot. If you’re smart enough and you know stuff, why not say it?”

Though not as involved as Shepard, other students, such as freshman mechanical engineering major Sabrina Coulbourn, enjoyed how Distefano interacted with the crowd.

“I thought the show was hilarious,” Coulbourn said. “I loved when he interacted with the crowd. Not a lot of comedians do that. They have their own performance and their own shows, but when [Distefano] actually talked to the crowd and made jokes with them, it cracked me up.”

Having worked as a comedian full-time for three years, Distefano encourages students to follow their passion and offers some advice.

“In the beginning, it’s going to be very challenging,” Distefano said. “Most people are not going to believe in you because most people, though not consciously jealous or mad at you, maybe wanted to pursue something and they didn’t, so they’ll tell you that you’re not good enough or that it’s too risky. If you want to do it, just go ahead and do it. Don’t wait another day wondering.”