ProfTalks drew a close to the fall semester with six talks on the positive outcomes of life being “rerouted.”

All six speakers had different paths, but they all lead to Rowan and accomplishing something unexpected.

Starting off the night in the Owl’s Nest was second-year higher education administration graduate student Emily Kofman. She came to Rowan with every intention to become a teacher, just like her grandmother.

When Kofman joined the Rowan After Hours (RAH) staff her sophomore year, she lacked interest in her classes and found that working in higher education administration was her true calling.

“I decided to do something very scary,” Kofman said. “I dropped my education major and decided to focus on things that would set me up for my future. It was kind of a shot in the dark. I didn’t know if it would happen.”

She highlighted how important it is to take risks. With every opportunity to play it safe and follow in the footsteps of her grandmother, Kofman instead decided to do what she enjoyed.

“You need to stop asking ‘what if,’ and ask ‘how can,’” she said. “Having that outlook rather than the ‘what if’ will set you up better.”

Next up, Rowan’s Assistant Director of Admissions Janelle Alexander, also known as ‘DJ Busy,’ was no stranger to rerouting.

“Growing up, I said I would never go to Glassboro,” said Alexander, who is also a PhD student in the doctoral program in the College of Education. “I would never be a teacher, I would never teach in Camden.

“Never say ‘never,’ because that’s what I did.”

Alexander taught for 10 years but wanted to make a bigger difference, so she decided to go into administration. Getting her master’s degree at Fairleigh Dickinson University, she sought out to become a principal.

“Growing up, I said I would never go to Glassboro…Never say ‘never,’ because that’s what I did.” – janelle alexander

“Little did I know there was a glass ceiling and I kept hitting it,” Alexander said.

She soon took matters into her own hands and opened Kingdom Charter School in Gloucester County. When things didn’t work out as planned, she found herself back at Rowan. However, Alexander said she’s happier than ever when she’s on campus and making the difference she’s always wanted to make.

Like Alexander, Associate Professor of Journalism Kathryn Quigley never pictured herself at Rowan.

“You could subtitle my life, ‘Well, that was unexpected,’” she said.

Quigley started her career in entertainment public relations, working for the Pennsylvania Ballet before being laid off. During her time there, she was doing freelance work for the Philadelphia Inquirer focused in Bucks County. While unemployed, she picked up more freelance work.

Quigley said she’d rather uncover what’s going on rather than cover it up.

“I walked in the newsroom and I felt like I was home,” she said.

“You could subtitle my life, ‘Well, that was unexpected,’” – kathryn Quigley

Life threw Quigley an unexpected curveball and she soon found herself reporting in North Carolina and then Florida. Growing homesick and missing the cycle of four seasons, she decided to go back to Philadelphia and apply for a job at the Inquirer. With no luck, she found a one-year teaching slot at Rowan and decided to take it.

“I said, ‘All right, I can work here,’” Quigley said. “Instead, I got hired and said, ‘Wow I really like this. I like my students and talking about journalism and I like not having to look at dead bodies like I did as a reporter.’”

She got tenure at Rowan and continues freelance work for the Inquirer. Her path changed again when she realized she wanted to be a mom. Ten years later, she has two adopted sons, Nick, 10, and Jack, 2.

“I always knew I was going to be a writer and a mom,” Quigley said. “The path I took to get there got rerouted.”

Junior finance major Rebecca Bradshaw originally went to school for pastry arts and was set on being a pastry chef. While working as a pastry chef assistant, she took classes at Rowan College of Gloucester County.

At Rowan, she decided to pursue finance, realizing she enjoyed working with nonprofits more than she thought she ever would. According to Bradshaw, all her work in different fields helped her to decide what she wants to do in life.

“It’s okay to not have it all perfectly planned out,” she said.

For senior history and English dual major Danielle Palazzolo, deciding to leave her original history and education dual major was easier said than done. Palazzolo said she didn’t feel ‘at home’ in her major.

“I WAS A RAVENCLAW AND EVERYONE ELSE WAS A GRYFFINDOR,” – danielle PALAZZOLo

“I was a Ravenclaw and everyone else was a Gryffindor,” Palazzolo said.

Going as far as student teaching, she ultimately decided that teaching wasn’t her path. After having an ‘ah-ha’ moment, she dropped the education major and stuck with history and English.

Closing the night was junior business management major Anthony Ramos, who has changed his major three times. Feeling an urge to impress not only his parents but those around him, Ramos had figuring out what to do with his life as a top priority. Like the rest of the speakers, however, his path was rerouted.

“My life is like a GPS,” Ramos said. “Always recalculating.”

With a positive outlook on his path, he considered the fact that jobs that students have in the future may not even exist yet.

“I do believe that opportunity does come knocking,” Ramos said. “But you have to set yourself up for it.” 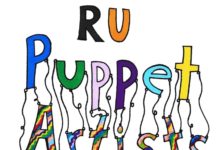